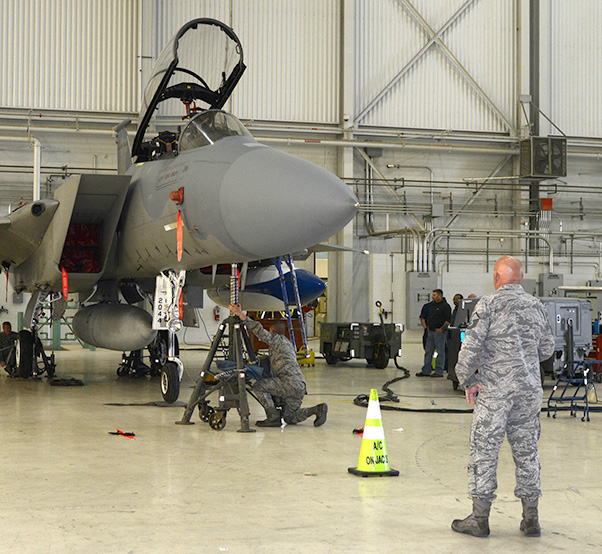 Brake upgrade testing for the F-15 fleet is one of the several test programs highlighted during a commander’s call held by Brig. Gen. Carl Schaefer, 412th Test Wing commander, June 8, 2016.

Dramatic video from an F-16 cockpit documents a pilot in distress as his heads-up display shows his plane headed towards the ground.

The pilot is unconscious, succumbing to g-forces. As his wingman repeatedly yells “recover,” there is no response as the fighter heads towards the ground; that is, until an alarm sounds and the plane’s systems take control and pulls the jet up and ultimately levels off.

“That’s extremely sobering,” said Brigadier Gen Carl Schaefer, commander of the 412th Test Wing at Edwards Air Force Base, Calif. “This is the Auto Ground Collision Avoidance System that has been fielded in all of the digital-flight-control F-16s in the Air Force. And the work that you support, and the things that you did, saved a life and an aircraft. Saved a husband and a father, and a son. He can return home and be alive because of all the things you do.”

Auto GCAS, which was developed here at Edwards and has saved four F-16s so far, is just one example Schaefer used to commend the Edwards workforce during a commander’s call June 8 in the base theater.

As is the norm, the 412th Test Wing is busy and the general highlighted several test programs and mission support accomplishments such as the opening of the Mojave Sky Community Center, renovations to dorms and housing; a new bulk fuel storage facility; the recent Run with History Half Marathon event; and continued improvements to Plant 42 in Palmdale. The 412th Medical Group was also acknowledged as being the number one medical group in Air Force Materiel Command two years in a row for deployment readiness.

Schaefer lauded the 412th Mission Support Group for the successes of the Visitor Control Center, improvements to Club Muroc and the 412th Communications Squadron for its work on increasing bandwidth for the base.

The general mentioned the first aerial refueling with the KC-46 earlier this year and how the test team found a problem with the refueling boom, which the contractor is currently fixing.

“We in developmental test did our job…When we fix this now, we save tax payers millions and millions of dollars. Millions because we found this problem now,” Schaefer said.

Thanks and applause were also given to those who kept all the aircraft in the sky.

“This is the most complex maintenance group in the Air Force, consisting of 17 different types of aircraft, 81 total. In a normal wing you may have two or three types of aircraft types and maybe 40 or 50 aircraft to worry about. They have been under manning resource constraints and hardware resource constraints and the mission has not stopped. They have gone above and beyond what I would expect a maintenance group to do to make sure our mission stays on path.”

Schaefer then focused on the way ahead for the 412th TW and emphasized the “innovation journey” he has put the wing on. The wing has assembled an innovation team to come up with ways to do things more efficient both in test and around base. A couple examples he provided were a portable and reconfigurable cockpit for the different test programs on base and a setup where a single operator can monitor up to four antennas at the range squadron.

“What’s the difference between innovate and process improvement? Day to day we are always going to be improving our processes and getting better. Innovation, for me, are those game-changing things we need to be thinking two, three or four years out from now, so we can invest now for a big game-changing thing for our Air Force to be more efficient. This is the place we should be innovating in the Air Force – the 412th Test Wing.”
He added that if anyone has an innovative idea, he wants to know about it and see if it can be funded.

The general also asked for volunteers to help out with the wing’s robust Science, Technology, Engineering and Mathematics outreach program.

Before wrapping things up, Schaefer introduced the new 412th TW command chief, CMSgt. Todd Simmons. Simmons hails from Hardeeville, S.C., and is a 21-year security forces defender. He will serve as the top enlisted adviser to Schaefer on matters regarding the Edwards enlisted force.