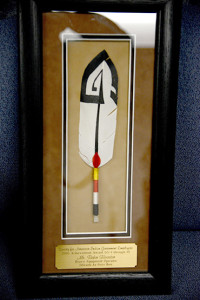 The Society of American Indian Government Employees presented Robin “Bubba” Hairston of the 412th Civil Engineer Group with this award for his contributions to the Edwards mission and to American Indians in government service.

A member of the 412th Civil Engineer Group at Edwards Air Force Base, Calif., was recognized for his contributions to the Edwards mission, and to American Indians in government service.

Hairston is an Apache Indian, and a military veteran. “I am a 20-year veteran of the Marine Corps and the Army. I am also an Apache Warrior. Apaches have always been known to be tough. But I feel proud, very humbled and very emotional to win this award.”

This is a prestigious award,” Hairston said. “It’s only given to American Indians for exemplary acts or performances. All the Indian nations in the country are reaching out to me and telling me how proud they are that I won this award.”

The award commends Hairston for displaying an exceptionally high level of dedication and professionalism in the performance of his duties.

David Sampson, 412th Operations Support Squadron airfield manager, praised Hairston as one of the most conscientious flightline workers he knows of.

“He drives the airfield sweeper and is meticulous about FOD (debris) clean-up,” Sampson said. “He talks about keeping “his” pilots safe out there, and he really means it! I wish everyone on the flightline took his job as seriously as Bubba!” 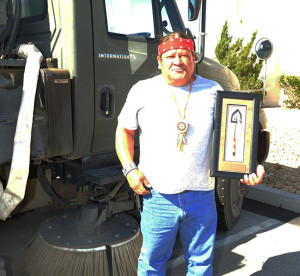 Heavy equipment operator Robin “Bubba” Hairston, 412th Civil Engineer Group, poses in front of his sweeper truck with the award he was given by the Society of American Indian Government Employees. The award was for his contributions to the Edwards mission and to American Indians in government service, and was presented during a ceremony in Tulsa, Oklahoma, June 7, 2016.

One day on the job, Hairston was running the sweeper on the flightline when he noticed a C-5 taxiing out.

“The aircraft was leaking fluid profusely,” he said. “I contacted the tower and they stopped the aircraft from taking off.”

Hairston’s award nomination stated that the aircrew confirmed that the C-5 would have suffered catastrophic failure of the hydraulic system if the aircraft had flown. His actions potentially saved the aircraft and its entire crew.

Hairston is also responsible for saving the life of a coworker.

“My coworker was in full cardiac arrest,” Hairston explained. “His heart had stopped and he wasn’t breathing. So I immediately started CPR and kept going until the fire department arrived and rushed him to the hospital. The fire captain later told me that if I hadn’t been there the coworker would have died.”

Hairston’s award also cites his active support for the local community as a member of “Blue Mountain Tribe,” an all-Indian rock band. The group performs at many local events, and through their performances they endeavor to help impoverished families.

“We focus most of our attention on donating to impoverished Indian communities and other poor families. Not just American Indian families,” Hairston said. “And whenever we play, we always mention that Blue Mountain Tribe is from Edwards Air Force Base,” he said. “We love our troops, and we love the base.”