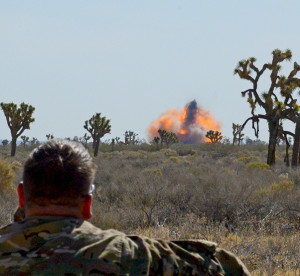 An airman from the 812th Civil Engineering Squadron, Explosive Ordnance Disposal Flight, watches the fire ball as 15 gallons of nitrocellulose-dope lacquer is blown up with C-4 June 6, 2016.

Explosive Ordnance Disposal Airmen from the 812th Civil Engineering Squadron at Edwards Air Force Base, Calif., blew up 20 gallons of a hazardous chemical at an on-base range June 6.

The chemical was determined to be a nitrocellulose-dope lacquer, which was found at a drop-off point for hazardous materials waste in Lancaster, California. The city was able to track it back to General William J. Fox Airfield.

“Nitrocellulose-dope lacquer was originally used to harden the flight surfaces of fabric-based aircraft,” said SSgt. Christopher Severe, 812th CES, EOD. “We knew from our research that this particular lot could have been used from between 1940 and 1956. We take a worst-case scenario approach so we assumed it was in its most dangerous state from 1940.”

Severe said this particular compound has a known issue of spontaneously combusting or igniting if it’s set down too hard.

According to the Environmental Protection Agency and DOD, as a general rule the military is responsible for disposing of military munitions found in local areas. Munitions also include chemicals. 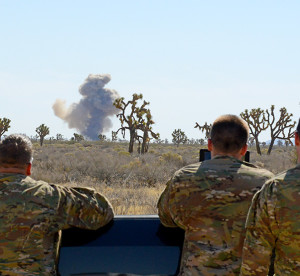 Aimen from the 812th Civil Engineering Squadron, Explosive Ordnance Disposal, watch as 15 gallons of nitrocellulose-dope lacquer is blown up at a range on Edwards Air Force Base June 6, 2016. EOD assisted the City of Lancaster with the disposal. The hazardous chemical was found at a waste facility in Lancaster and is highly volatile.

Although it is undetermined who the nitrocellulose-dope belonged to, Edwards EOD and Environmental Management had no problem helping out.

“We have a very good working relationship with the local communities. The emergency coordinator for the City of Lancaster contacted us to see if we might be able to help them identify and deal with the nitrocellulose-dope,” Severe said.

EOD and Edwards Environmental Management partnered with Lancaster and contractor Worldwide Waste Management to transport the four five-gallon drums of the chemical to base for disposal.

The contractor packed up the nitrocellulose drums early in the morning and transported them with an escort provided by the Lancaster Sheriff’s Department. After reaching the outskirts of the south gate, 412th Security Forces Squadron took over the escort duties.

The nitrocellulose was placed at EOD’s Open Burn/Open Detention range.

“This is a state-permitted treatment facility we have for doing this kind of disposal,” said Severe. 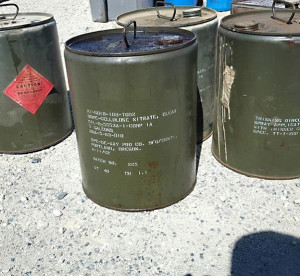 Twenty gallons of nitrocellulose-dope lacquer were discovered at a waste facility in Lancaster, Calif. The chemical was traced back to General William J. Fox Airfield and is highly volatile. The City of Lancaster contacted Edwards AFB to ask for assistance in disposing of the chemical.

“The first detonation was to ensure all of our initial tests and calculations were correct and we would achieve the effect we wanted. This shot contained 250 pounds of C-4 with one five-gallon container of nitrocellulose-dope and a non-electric initiation system. Since the first shot went off perfectly we were able to combine the three remaining containers into one shot. This shot contained 1,062.5 pounds of C-4.  If you were to convert the second shot to TNT, which is something we do as part of our safety work-up, it would equal about 1,500 pounds of TNT.”

EOD initially looked at two methods of disposal for the substance. The first one was to absorb it into a medium like saw dust and then burn it.
“We felt this would be too dangerous of a situation because the expected burn temperature was in excess of 3,000 degrees Celsius (5,432 degrees Fahrenheit), this would make it a hotter burn than our military AN-M14 thermite grenades. The cleaner solution was to use large amounts of explosives and achieve what we call total consumption. This is where all of the material is consumed in the detonation leaving nothing behind,” said Severe.

The operation went according to schedule and planning with all of the nitrocellulose-dope destroyed by 9:30 a.m.