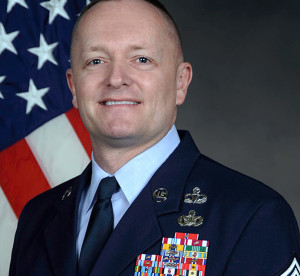 Family and fellow airmen have been the keys to success in CMSgt. Jason France’s Air Force career of 26 years and counting. As the new command chief of Air Force Materiel Command, France plans to keep them a priority.

“I wouldn’t be where I am today without the support of my family and the balance they bring to my life,” he said. “My success is also due in part to my mentors and fellow Airmen who, over the years, have challenged me, trusted me, supported me, and at times taken some risk in order to allow me opportunities to grow and develop and better serve airmen.”

France says it has been a privilege to serve Airmen, and now he has an opportunity to take care of the airmen and families in AFMC.

“An important part of taking care of airmen involves communication,” he explained. “It’s my responsibility to deliver the right information to the right people at the right time in order for them and our command to succeed. At the same time, I need to receive feedback and information from our airmen to make sure my focus is on the right things.

“Another important part of that care involves relationships,” France continued. “Building new relationships, leveraging existing relationships and engaging with the right people, both inside and outside of the command, will allow me to increase people’s understanding of and appreciation for what our command contributes to the fight — to really tell the story of how our phenomenal workforce delivers and supports agile war-winning capabilities.”

France is well-prepared do just that. He has had several assignments within AFMC and has also served in leadership positions at all levels across the Air Force, including as superintendent of the Secretary and Chief of Staff of the Air Force Executive Action Group. Most recently, he was command chief master sergeant of the Air Force Sustainment Center at Tinker Air Force Base, Okla.

As AFMC command chief, France serves as the senior enlisted leader for the command and is the primary advisor to the commander and senior staff on all matters affecting enlisted personnel. However, while he certainly takes that role very seriously, France is interested in issues that affect all airmen — enlisted, officer and civilian.

“Focusing on the commonalities of the Airmen within our command makes our team stronger,” France said, “and there are more commonalities than differences. Issues that affect our civilian airmen, for example, also affect our enlisted airmen. And that makes all airmen issues ‘enlisted issues.'”