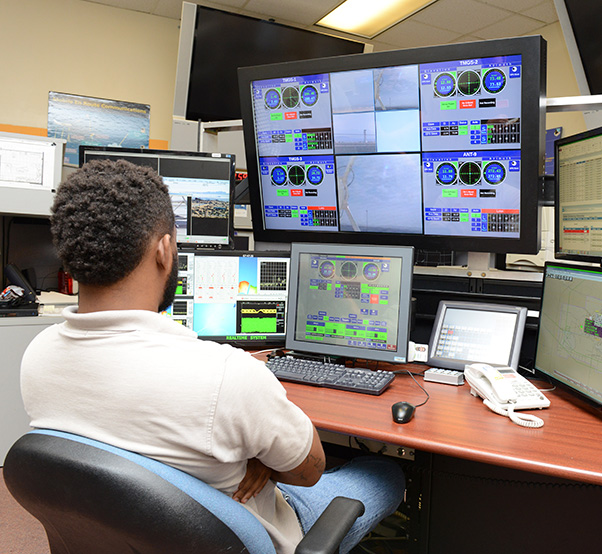 At Ridley Mission Control Center, an employee sits in front of the Single Operator Multiple Antennas station developed by the 412th Range Squadron June 7, 2016. SOMA aims to use manpower more efficiently and ultimately save the test wing money by having one operator monitor up to four tracking systems. Thus, freeing up personnel to handle other duties and cross train.

One theme the Department of Defense is emphasizing is getting warfighters what they need, when they need it. Now and in the future.

Secretary of Defense Ash Carter says he is looking at the intersection between technology and defense as he looks to place programs and organizations to meet the needs of warfighters faster and more efficiently in an increasingly competitive world.

To do that, DOD has intensified its push for innovation and innovative ideas, bringing together minds from the military with those of companies like Google and Space-X.

“This is the place we should be innovating in the Air Force — the 412th Test Wing.”

During a commander’s call last week, Schaefer stressed the need to have an innovation culture, and through a newly-assembled team, is setting up the path for the wing’s “innovation journey.”

“If you have an innovative idea, I want to know about it. I want to see what it is and see if we can fund it.”

One innovation project that is getting its legs is the Single Operator Multiple Antennas endeavor from the 412th Range Squadron at Ridley Mission Control Center.

When a test mission is flown, telemetry tracking systems (antennas) take data from the aircraft and sends it back to mission control where it is monitored and recorded. Currently, one person is required to monitor one antenna during a test mission. Each antenna automatically tracks the signal from the test aircraft, but it can lose track from time to time and then it requires a human to re-establish the track.

Additionally, the person monitors health and status of the signal and the antenna. While this duty is critical to flight test, it is also low intensity. Currently, each telemetry antenna requires a dedicated person to sit and operate the antenna for the entire mission and the operator stations are located in a few different buildings geographically separated from Ridley Mission Control.

SOMA aims to use manpower more efficiently and ultimately save the test wing money by having one operator monitor up to four tracking systems. Thus, freeing up personnel to handle other duties and cross train.

Funding was provided and 412th RS built their first SOMA station complete with all the monitors and switching features needed for one person to monitor four antennas. The team built a proof-of-concept in 120 days. The station was demonstrated for the first time to innovation team members and test wing leadership June 7.

Some issues still need to be worked out before SOMA can be fully implemented, but if fully operational, the 412th RS predicts it can save $240,000 annually in costs along with increasing telemetry antenna availability by 25 percent.

The 412th RS used a concept, design and realization route to their SOMA innovation project.

“We want people to feel empowered to innovate and we want them to talk to people about their ideas, get buy-in from others, collaborate with others, and execute their ideas,” said T.J. Wuth, who is part of the 412th TW Innovation group. “We’re developing a framework to help people pursue their innovative ideas, but one of the key ideas is that there is not only one path or procedure for people to follow to start innovating.”

Wuth added that people with ideas should collaborate with their teammates and unit leadership. He can also point people in the right direction if they need guidance.

Stay tuned for more highlights and information about innovative ideas and plans coming from Edwards.