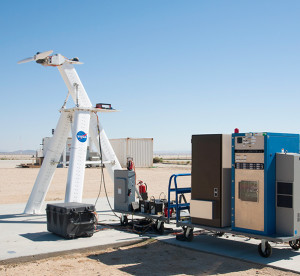 The equipment required for an electric propulsion test is ready for research.

Before the first electric propulsion X-planes fly, such as the X-57, researchers at NASA’s Armstrong Flight Research in California are using a unique test stand to understand the intricacies of how electric motor systems work.

Made of steel and aluminum, the 13.5-foot tall Airvolt test stand is one of the newest tools in NASA’s multi-center approach to explore the use of electric propulsion on future aircraft. The goal of using this technology is to burn less fuel, while reducing emissions and noise.

“The test stand will help us to understand electric propulsion and the nuances of different systems,” he said. “A lot of claims are made about the efficiency of electric motors and we want to verify that and gain experience with commercial off-the-shelf, or custom-designed systems.”

Airvolt also permits researchers to evaluate early-stage technology and build confidence in its use for future systems.

One of the key items researchers need to know is if integrated electric propulsion can be used like traditional aircraft propulsion, Lin explained. If there are distinctions in how the systems work, researchers will find methods of managing the differences.

For example, Airvolt research has already confirmed a challenge – electro-magnetic interference, or EMI, he explained. EMI is when an electric circuit is interrupted by an internal or external force or condition, which results in noise interference.

“EMI issues impacted data collection and real-time displays and gave us false indicators in the control room,” he explained. “It was caused by the propulsion system’s noise.” 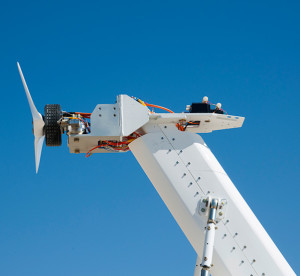 The electric propulsion system to be tested is secured at the top of the Airvolt test stand and instrumented to collect data.

The solution was to install a combination of hardware filters on the test instrumentation and use digital filters on the acquired data. With the challenges eliminated, researchers in the control room were able to safely monitor key parameters.

Test operations begin with the installation of an electric motor with a propeller attached and the system affixed to the test stand. A number of high-fidelity sensors on the test stand provide critical measurements to a data acquisition unit that processes, records and filters the data and sends it to the control room for monitoring.

During an electric motor test on Airvolt, a 50-foot area is cleared and most of the staff is in the control room monitoring the research results, Lin said. A safety operations representative and a quality inspector observe the test from a safe distance.

As the motor starts the sound is similar to that of a large, square window fan, only slightly louder and with the propeller blade turning much faster. It is much quieter than a typical conventional combustion piston engine of the same size.

The Pipistrel motor is powered by lithium polymer batteries and produces 40 kilowatts of power, which are monitored by the Airvolt that is capable of accommodating systems that use up to 100 kilowatts of power. The test stand can also withstand 500 pounds of thrust.

Researchers using Airvolt are interested in determining voltage, current, power, torque and thrust performance of the commercial off-the-shelf components and learning about the characteristics of such a system, Lin explained. In addition, researchers are looking to build competencies in electric propulsion system verification and validation. 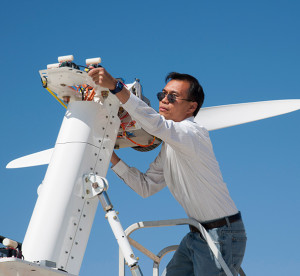 “Preparatory work for developing in-house skills and knowledge can’t wait until an X-plane comes,” he said. “We want lessons learned early on so that we can apply them to upcoming designs and establish best practices for operating those systems.”

Next up for the Airvolt are tests during late summer on the Joby Aviation JM-1 motor that will provide information for modeling simulations of the electric propulsion elements.

The data collected from the tests will include torque and thrust measurements, high-fidelity voltage analysis, power efficiency, and details on how the system behaves. A simulation model will be developed from that information to study flight controls, power management and transition issues of a distributed electric aircraft.

To prepare for the possibility of distributed electrical propulsion, where multiple motors are used, “you want to understand the characteristics of one motor system first so variables can be reduced when trouble shooting the multi-motor configuration,” Lin explained.

“Overall, we are getting excellent data,” Lin said. “What we are learning will help us to understand this new technology, and be a starting point for complex challenges. Each system is different, but we will be ready.”

Tools such as Airvolt support a key NASA Aeronautics Research Mission Directorate’s goal to transition the aviation community to low-carbon propulsion – an effort that is part of the agency’s multi-center electric propulsion plan.