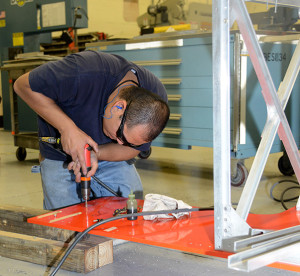 Rafiq Viray, a model maker with the 412th Maintenance Squadron Instrumentation Division, threads mount holes in the base of the flight test engineer workstation scheduled to be used for KC-46 testing. The workstation was designed in modules for ease of construction, installation, and reconfiguration.

Refueling developmental testing with the Boeing KC-46A, are going on over 1,000 miles away in the Pacific Northwest, with Edwards Air Force Base, Calif., supporting with chase aircraft.

Meanwhile, team Edwards has been working feverishly here to provide testing support on the ground and the air.  One aspect is the engineering and development of modifications to Edwards Aircraft to support tanker testing and qualification.

Team Edwards’ job is to certify aircraft to receive fuel from the KC-46, according to Rosie Feord, 412th Test Engineering Division modification manager for the KC-46 program.

A number of aircraft here have been modified with fuel pressure sensors and a recording device called a BOD-10 (Battery Operated Data acquisition system) to record fuel flow and pressure during refueling operations. The data from these aircraft will support Air Refueling Certification (ARC), the ability of KC-46 to deliver fuel to a variety of aircraft, and also to receive fuel from other tankers. To accomplish this a number of aircraft, more than 13 different types, will be fitted with the BOD-10 modification, including F-15s and A-10s at Eglin Air Force Base, Florida.

The battery-powered unit was chosen because installation is easier and less expensive. The alternative would be building an installing a unit that ran off the aircraft internal power. 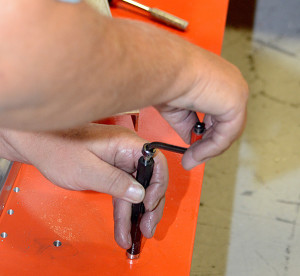 Joe Beachboard, a model maker with the 412th Maintenance Squadron Instrumentation Division, installs threaded inserts in the base of the flight test engineer workstation scheduled to be used for KC-46 testing. Engineers, model makers and technicians worked closely to design and construct the workstations. The modular design of the station allows for easier construction, installation and reconfiguration.

“We would have to tap into the aircraft electrical system.” This means we’d have to take the airplane apart and run a bunch of wiring,” Feord said.

The battery powered system was designed and built by engineers from the 412th TENG, and model makers and instrumentation technicians in the 412th Maintenance Group’s Instrumentation Squadron.

In addition to the BOD-10s, work is now underway to build flight test engineer workstations, which will be installed in the KC-46 and collect data for ARC. According to Feord, these are the most important piece of the puzzle.

“Without these, ARC can’t happen,” she said.

Greg Didoha, lead engineer for the workstations, has been working on the design since February of 2015.

“The design of the workstation was part of a requirement that we could get a plane out here, put our stuff on really quick, plug into the airplane and go fly test points,” he said. “When they’re all done we pull of our pallet and the plane goes away.”

Didoha’s design for the workstations started with basic ergonomic requirements. He then had to build in the specific requirements of the flight test engineers. Finally, he had to figure out how to get the station on board the aircraft without breaking anything. The engineer also designed the workstations with the future in mind.

“I decided to look at the design as generic, since we have other (cargo and refueling) planes. So it’s something we could put in any one of them,” he said. “It may have initially complicated the design, but over time it will help.” 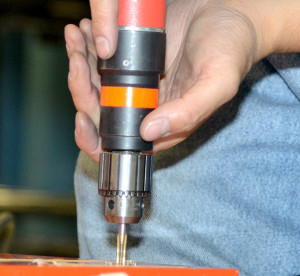 Rafiq Viray, a model maker with the 412th Maintenance Squadron Instrumentation Division, threads mount holes in the base of the flight test engineer workstation scheduled to be used for KC-46 testing. The workstation was designed in modules for ease of construction, installation, and reconfiguration.

According to Didoha, the workstation is basically modular. It is outfitted with equipment specifically for the KC-46, but could be tailored to other projects without any permanent modification to the structure.

The effort to support the KC-46 program has been tremendous — the project is using more than half the resources of the (Modification Branch) according to Feord.

“We brought on six additional engineers to augment the staff. This is the number one priority project at Edwards Air Force Base,” she said. “We will do what needs to be done.”