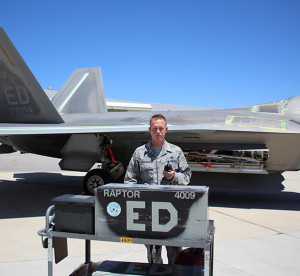 Winning the award shows that Knarreborg embodies the service and achievements with regard to the Gen. Lew Allen Jr. Trophy. Job performance, job efficiency and results, job knowledge, and other awards and recognition is all that is weighted into this award nomination.

Knarreborg is a production superintendent and oversees maintenance production efforts and assigns maintenance priorities to meet the flying schedule. “I strive for excellence and I am passionate about the mission, but also the people, the maintainers on the flightline.”

He will now move on to the Air Force level.

Named after the 10th chief of staff of the Air Force, the award recognizes two categories of individuals, base-level logistics readiness officers and SNCOs directly involved in mission execution. Allen served as a pioneer in scientific and research projects throughout his career, which culminated as commander, Air Force Systems Command in 1977, followed by chief of staff in 1978.

Allen graduated from the United States Military Academy in 1946 and served as a bomber pilot in Strategic Air Command. He held multiple assignments in nuclear capable units and earned a doctorate degree in Physics in 1954.