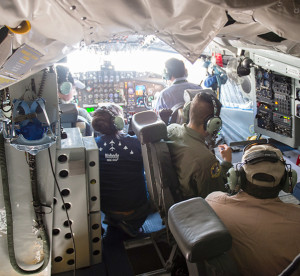 By Jan. 1, 2017, the European Union is requiring all existing aircraft to have Traffic Collision Avoidance System version 7.1 installed on aircraft entering its airspace.

TCAS monitors the airspace around a plane for other aircraft independent of air traffic control and warns pilots of the presence of other transponder-equipped aircraft, which may pose a midair collision situation.

TCAS is generally required on all aircraft larger than 12,500 pounds and/or on planes that carry more than 19 passengers.

The system is installed to prevent close calls and midair collisions by notifying pilots of approaching aircraft with attention signals and commands, both audio and visual. Pilots are notified with TAs and RAs — traffic advisories and resolution advisories. TAs are for situational awareness and RAs are instructions to the pilot on what maneuver to make.

About 30 testers led by the 418th Flight Test Squadron at Edwards Air Force Base, Calif., are working to test the upgraded TCAS 7.1 for the Air Force’s KC-135 Stratotanker fleet, which current uses TCAS 7.0 software.

“Having TCAS 7.1 will allow [the U.S. Air Force] to fly the KC-135 in European airspace,” said 2nd Lt. Renner Mead, 412th Operations Group executive officer and lead test conductor. “Starting Jan. 1 2017, we cannot fly KC-135s in Europe without this. The last flight safety brief by the wing was pretty much all about TCAS. There have been a lot of close calls in the local area and around the country.”

The TCAS and Identification Friend or Foe systems work together to detect other airplanes and determine potential threats. Depending on flight levels and closure rates of aircraft, the TCAS sensitivity changes to reduce nuisance traffic advisories and resolution advisories. Traffic advisories warn pilots of threat and resolution advisories command the pilot to descend, climb, or level off to avoid threat. Other non-threat traffic is also displayed to the pilot.

“Just like how a policeman can detect how fast you’re going with a radar gun, TCAS uses a similar concept to determine closure rates. The closure rates along with other aircraft data are used in the logic to calculate the closest point of approach and trigger TA/RAs when needed.” said Alex Regalado, 418th FLTS flight test engineer.

Testing TCAS 7.1 on the ground can be complicated with a traditional ramp tester. Ground tests require the KC-135 to be connected to test equipment to simulate that it’s flying. In addition, other test equipment is used to simulate approaching aircraft (also known as intruders) to try and trigger the TCAS alerts. Some simulated flight scenarios require both aircraft, KC-135 and intruder, to climb or descend at a certain time with correct geometries to trigger alerts.

The test team’s main goal during the ground test is to test TCAS 7.1 software before the test flights by triggering different RAs during various flight scenarios.

The updated version has a few new features including specific commands for clarity and improved reversal software in vertical chase situations.

“In the reversal feature, if two airplanes are close and the TCAS 7.1 issues an RA, and one plane doesn’t listen, then the other plane will be given a command to go the other way; it’s more intelligent,” Mead said.

The KC-135 pilot has the option of putting TCAS on TA mode only or standby during aerial refueling, which eliminates the nuisance resolution advisories when the plane is conducting is primary mission.

Along with the heavy importance of testing and certifying TCAS 7.1, an additional challenge is facing the testers and the KC-135 fleet entirely. The current box and processor that holds the TCAS 7.0 is being discontinued by the current contracted manufacturer.

“The box that holds the TCAS is going obsolete and we need to certify the new box and processor as well,” said Mead. “We lose 10 TCASs everyone month within the entire fleet of 400 KC-135s. Right now, we have a stockpile of current boxes to do maintenance like we normally would, but without certifying the new box, we would be losing 10 jets every month once we deplete the supply of current boxes.”

Ground testing of TCAS 7.1 has made way for flight tests last week using a T-38 to try and trigger advisories in the air like it’s supposed to.