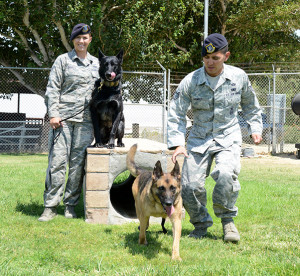 SrA. Grace Daniels and her partner Rolf watch as SSgt. James Ramsey and Sasa run through the obstacle course at the 412th Security Forces Squadron’s Military Working Dog facility at Edwards Air Force Base, Calif. Both 412th SFS K-9 teams were detailed to support the U.S. Secret Service for the Democratic and Republican National Conventions in Cleveland and Philadelphia.

Two teams from the 412th Security Forces Squadron, Edwards Air Force Base, Calif., were recently detailed to the U.S. Secret Service to ensure the security at both the Democratic and Republican National Conventions held in Philadelphia and Cleveland, respectively.

SSgt. James Ramsey and his partner, Sasa, and SrA. Grace Daniels and Rolf, joined hundreds of K-9 teams to support the political conventions this year.

According to Ramsey, the direction to support the conventions came from headquarters, but it was up to the individual units to pick the handlers. He was chosen to support the Secret Service at the Republican National Convention in Cleveland, dedicating approximately six weeks to the task.

“I was assigned to the RNC for the build-up,” Ramsay said. “We were searching all the areas they were building up — like they took a five-story parking garage and they made that into media row.

“I was there when they were putting up the walls and installing the equipment, and I was in the stadium across the street,” he said. “I was tasked to sweep all those areas (for explosives).”

Daniels just graduated from dog handler school in February, and this was her first time supporting the U.S. Secret Service. She worked the actual events, both Cleveland and Philadelphia.

She said she was grateful to have a coworker there earlier to warn her about what to expect. She hinted that not everyone seemed receptive to military members at the conventions.

“It was eye opening, she said. You see people — the protesters, the media — how they look at you. But you’re just there to support the Secret Service by doing your job.”

Daniels mentioned that she also got to meet several celebrities during her work at the conventions.

“You’re searching vehicles, and you just run into them.” Some of the names she mentioned included Alicia Keys, Marcus Luttrell, and Katy Perry.
A nine-year veteran, and a dog handler since 2013, Ramsey is no stranger to working with the Secret Service.

He explained that the military working dogs handled their tasks well despite being in an unusual situation.

“Each dog is going to be different,” Ramsey said. “My dog, she works really well. But when you put dogs in different environments that they’re not used to, at first they’re going to be a little skittish. They’re going to be very aware of their surroundings. But once you get them into a cycle they start adapting pretty well.”

Both Airmen appreciated their opportunity to support the country’s political process.

“It was fun, it was a good experience,” Ramsey said. “It was the biggest one of the year for us.”

Daniels said she thinks she got lucky with this assignment. “I will never experience that again in my career — back-to-back conventions for both parties.”