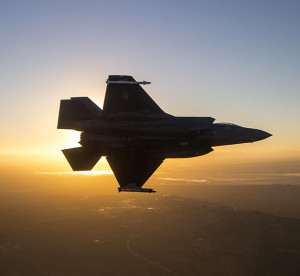 The F-35A is the latest addition to ACC’s fleet of deployable and fifth-generation aircraft. It provides air superiority, interdiction, suppression of enemy air defenses, and close air support as well as great command and control functions through fused sensors, and it will provide pilots with unprecedented situational awareness of the battlespace that will be more extensive than any single-seat platform in existence.

As commander of the 412th Test Wing, Brig. Gen. Carl Schaefer said he was proud of his team’s contributions toward achieving this milestone, calling it an amazing testament to the 412th Test Wing executing our mission of ensuring war winning capabilities for decades to come.

“We finished up the IOC testing about three months ago for the F-35 and were able to deliver to ACC a product that is ready to go to war today,” Schaefer said. “That was all because of the efforts of the men and women of the 412th Test Wing, the Air Force Test Center, and the (F-35) Joint Program Office and Lockheed.”

“It’s the second of three IOCs,” he said.  “The Marines declared IOC last year and the Navy will declare IOC in the future. The ITF’s efforts towards IOC involved testing the 3i software which is what is now loaded on the combat coded jets at Hill Air Force Base.”

Both commanders stressed that while the declaration of IOC is a major accomplishment, F-35 testing here is far from finished. 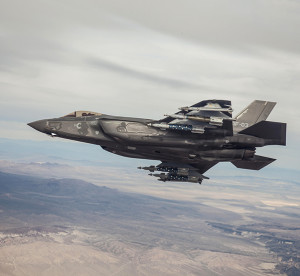 “The actual declaration of IOC for the AF doesn’t change what the ITF is doing day to day – looking at FOC software – but is validation of years of work getting the 3i software to a place where it could be effectively used by the warfighter,” Chari said. “The ITF played a major role in evaluating 3i and was the organization that recognized, reported on, and then validated fixes for the stability issues that would have prevented effective combat operations.”

“It’s a huge day of celebration, but just know that our work isn’t done,” Schaefer added. “Now we’re testing Block 3F software to enable even more combat capability for the Air Force, the Marine Corps, the Navy, and our partner nations.”

The general explained that the IOC declaration is more than one milestone for Team Edwards, and to him personally. “It’s another amazing milestone because it’s been 11 years since the Air Force has declared IOC on a fighter,” he said.

The last IOC declaration for an Air Force fighter was the F-22 in 2005, which was also enabled by the members of the 412th Test Wing.

“This is an amazing day for me personally because the year prior to this job I was working for the Chief of Staff in the F-35 integration office at the Pentagon and also working to make sure the Air Force was ready for IOC,” Schaefer said. “To see it from the F-35 integration office to now being the test wing commander is unique and it’s an honor.”

The F-35 Integrated Test Force first began operating here in 2005, with the first aircraft arriving in 2009.

“The ITF has come a long way since it started over a decade ago,” Chari said. “It’s a seamless team of active duty, government civilians, contractors, and partner nation members that have been executing the largest flight test program in history. The scale of testing is enormous and to have reached AF IOC is a great testament to the hard work and sacrifices that the ITF and Test Wing as a whole have put in over the years and will continue over the next year to close out development.”