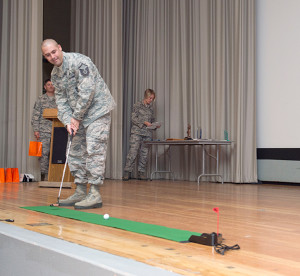 MSgt. Joseph Duffy, 412th Mission Support Group, attempts a putt on a portable green as Brig. Gen. Carl Schaefer, 412th Test Wing commander, watches during the wing’s second quarter awards ceremony Aug. 3, 2016, at the base theater. Duffy won Senior Non-commissioned officer of the Quarter. All winners present were given the opportunity to sink a putt in the golf-themed ceremony.

Summer is a great time to get out and golf and that was the theme of the 412th Test Wing 2nd Quarter Awards Ceremony held Aug. 3 at the base theater.

Each award winner present got the chance to attempt a golf putt on stage with a portable green and hole after receiving their award from the general. Congratulations to all 2nd quarter winners!