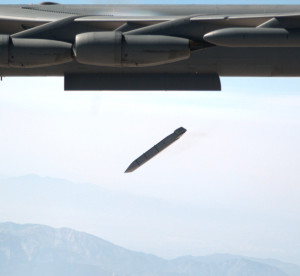 A B-52 releases a Joint Attack Surface Standoff Missile from internal weapons bay at Edwards Air Force Base, Calif. This is the first time the JASSM has separated from the Conventional Rotary Launcher in the internal bay of the bomber. The test was the first phase of validation for the CLR.

Success marks another ‘first-ever’ for AFTC
The personnel of Edwards Air Force Base, Calif., accomplished another first recently by executing a clean separation of three Joint Attack Surface Standoff Missiles, or JASSMs, from the internal weapons bay of a B-52 Stratofortress at Edwards.

The aircraft has long been capable of carrying JASSMs on its wing pylons, but this is the first time they have been successfully released from Conventional Rotary Launcher in the internal bay.

“That was a first-ever for the B-52, and is also going to be another amazing enhancement in B-52 combat capability for Global Strike,” said Brig. Gen. Carl Schaefer, 412th Test Wing commander, who flew the F-16 photo chase plane for the JASSM mission. “I got to chase the first-ever JASSM drop from the internal weapons bay of the B-52. We dropped it right here on the range at Edwards.”

The venerable bomber could carry up to 12 JASSMs on its wing pylons, said Jose Estrada, a weapons integration engineer with the 775th Test Squadron. Integration of CRL in internal weapons bay adds a capability of carrying eight more missiles in the aircraft, increasing the B-52’s JASSM payload by more than 60 percent.

The previous, or legacy, launcher used in the B-52 internal bay was the Common Strategic Rotary Launcher. This launcher was only capable of carrying unguided munitions, or “dumb bombs.”

Another advantage to carrying weapons internally was that less drag is created on the aircraft which increases fuel efficiency, said Brian Pinto, also a weapons integration engineer with the 775th.

“For long range operations, this means less drag. The aircraft can fly further and faster and still return to base after the mission,” Estrada said.
Although the release of missiles was the milestone, the missiles weren’t the main focus of the testing, Estrada said.

“The CRL is really what we’re looking at. We’ve already validated the [Joint Directed Attack Munition], now we’re working the JASSM. The next step is the [Miniature Air Launch Decoy].”

Earl Johnson, the test project manager, said this separation test was part of the first of three phases, and primarily focused on data collection. “We accomplished fit checks, making sure the weapons had clearance, within the weapons bay, while rotating on the CRL, demonstrated a clean separation of the weapon in flight, and made sure everything was done safely,” he said.

The next phase – the interim phase – will include more of the same testing, but with the addition of live weapons. And the third phase will validate the CLR system’s full capability.

The JASSM is a long-range, conventional, air-to-ground, precision standoff missile for the U.S. and allied forces. According to Lockheed Martin, the weapon’s producer, it is designed to destroy high-value, well-defended, fixed and relocatable targets, while JASSM’s significant standoff range keeps aircrews well out of danger from hostile air defense systems.