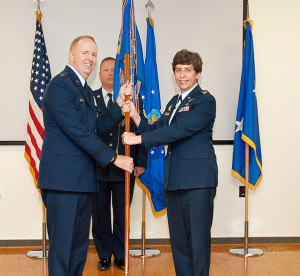 A change of command ceremony was held at the “Rocket Lab” at Edwards Air Force Base, Calif., Aug. 11, 2016, where Col. Patrick Davis (far right) relinquished command to Clark.

Davis heads on to a new assignment at Wright-Patterson Air Force Base, Ohio, home to the Air Force Research Laboratory headquarters.

Clark comes to the High Desert after serving as the military assistant to the chief scientist of the U.S. Air Force in Washington, D.C. She is now responsible for the work and wellbeing of 500 military, civilian and contractor personnel at the laboratory’s $2.5 billion, 65-square-mile research site.

AFRL can claim that nearly every U.S. rocket-propelled system used today for tactical, ballistic launch, space launch and space operations can trace propulsion technology back to the Edwards site.