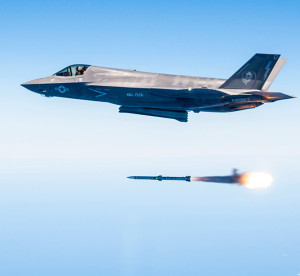 Maj. Douglas Rosenstock fires an AIM-120 missile from an F-35 during a recent weapons test surge at Edwards Air Force Base, Calif. By the end of the surge the F-35 Integrated Test Team released 30 weapons in 31 days, a first in flight test.

Historically, WDAs take place once a month given the myriad of coordination required.  The highest number previously accomplished in a month was three in November of 2014 during block 2B software testing.

Maj. Charles Trickey, interim director of operations for the 461st Flight Test Squadron, flew the final mission of the surge Aug. 17, 2016. The mission was completed at White Sands, where the F-35s shot two AMRAAMS at a QF-4 Drone.

“Some of these WDAs were particularly challenging events,” Trickey said. He said the final mission was actually the fourth attempt to complete this test.

“It was really cool to see the satisfaction of the team, and to get that feeling of accomplishment after doing something that challenging.”

All told, the ITF deployed 30 weapons in 31 days, which included 12 WDAs, and 13 separations, according to Trickey.

“30 separations in 31 days; that’s never been done before in flight test,” said Capt. Brett Tillman, a flight test engineer with the 461st. “The fact that we could get everything together to do that number of separations in that few days is pretty amazing.”

The effort for this surge wasn’t limited to the F-35 Test Team. There were a number of units outside the ITF that put in extra effort and time to make the surge successful, including Edwards airfield operations, Edwards tanker operations, the 416th Flight Test Squadron and the F-35 Joint Program Office.

“The amount of coordination and teamwork from the ITF and the outside organizations to enable this is unprecedented,” Tillman said. “The work these team members put in is amazing. It couldn’t have been done without them. 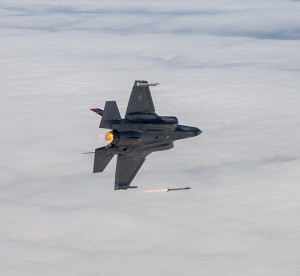 Test pilot Scott McLaren launches and AIM-9X air-to-air missile during weapons surge testing. The recent surge included many firsts, including the first air-to-air kill of a drone for the F-35.

“The WDAs rely on the full capability of the F-35 — multiple sensors, navigation, weapons envelope, mission planning, data links and inter-agency range scheduling — all working in sequence to put steel on target,” said Lt. Gen. Chris Bogdan, F-35 Program Executive Officer.  “This was a tremendous effort by the F-35 test team.  They surged and worked seven days a week for more than a month to expend 30 ordnance and advanced weapons testing.  This testing has moved us that much closer to delivering the full F-35 capability to warfighters within the next two years.”

“This is a testament to how the program is maturing with all the weapons we were able to deliver in such a short time.” Trickey said. “This is going to be huge for the warfighter, and us getting this accomplished is going to help get the jet out on the street a little faster and with more capability.”

The F-35 is a multi-role, next-generation fighter that combines advanced stealth with speed, agility and a 360-degree view of the battlespace.  The F-35 will form the backbone of air combat superiority for decades to come and replace legacy tactical fighter fleets with dominant air-to-air and air-to-ground capabilities to deter and defeat potential adversaries.