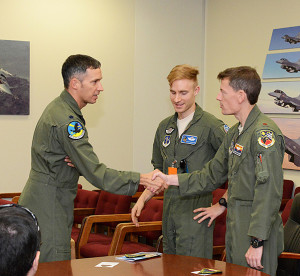 Test pilots and engineers from the 416th Flight Test Squadron at Edwards Air Force Base, Calif., had the chance to meet face-to-face with one of the squadron’s success stories Aug. 25, 2016.

The group met with an allied nation pilot trainee who returned home alive after he experienced a g-force-induced loss of consciousness and his F-16’s Automatic Ground Collision Avoidance System activated, executing a ground-avoidance maneuver, just as the system was designed to do. The 416th tested and proved the F-16s Auto GCAS.

The pilot, whose call sign is Ocho, and his instructor pilot came to Edwards at NASA’s request. Both pilots are assigned to Arizona Air National Guard’s 152nd Fighter Squadron in Tucson, Arizona. The squadron has an international F-16 training program.

The meeting took place in the C-Dot Auditorium, which was named for Maj. Aaron “C-Dot” George who was a 416th FLTS pilot lost to CFIT — controlled flight into terrain — with photographer Judson Brohmer in 2001.

“They could have been saved by an A-GCAS fly-up, but the jet they were flying didn’t have the system,” said Lt. Col. Chris Keithley, 416th FLTS commander. “Fast forward almost 15 years, and [an allied nation pilot] got a fly-up during air-to-air training in Arizona. He’s not alone. To date, this technology has saved four pilots’ lives in training and combat. This means their families didn’t lose a husband, father, son or brother. It also means they’re able to serve their country another day. It’s a huge win and I can’t overstate how meaningful it is.”

The pilots were flying in two separate F-16s in the skies over the Southwest United States May 5, 2016, when the trainee began a basic fighter maneuver.

“I started to roll and started to pull and I’m following [the instructor pilot] with my eyes,” Ocho said. “The next thing I remember is just waking up and hearing ‘recover.’ It happened so fast. Usually, everyone who has been pulling G’s for a long time; most people get tunnel vision that gradually comes in, that’s what I always get, but that day I didn’t get anything.”

Ocho said the first thing coming out of unconsciousness was hearing his instructor pilot, Maj. Luke O’Sullivan, saying “recover” several times. Once he opened his eyes, Ocho said he was confused for “one second” and then saw the ground coming very fast.

“I was already at the controls, but it had seemed I had not moved at all. When I woke up, I thought, ‘what just happened? What’s going to happen?’ Everything just came to me at the same time. I immediately started to pull up.”

Ocho’s F-16 Auto GCAS had already activated and the plane performed a roll-to-upright maneuver after sensing something was wrong.

“It’s definitely a valuable system…it does what it’s supposed to and it works,” said O’Sullivan, after witnessing Auto GCAS in action firsthand.

Both O’Sullivan and Ocho said pilots in their squadron are briefed on what Auto GCAS does and it is a checklist item for the pilot to make sure it’s on before takeoff, but after visiting with some of the developers of the system, it was an eye-opening experience.

“Walking out to the jet on a daily basis; I know a lot about the stick-and-throttle aspect of it, but thinking about all the internals of this airplane, I didn’t really think about all the different lines of code in the software and all the work that goes into testing to make sure it’s a viable system that’s not going to interfere with what we’re trying to do out there,” said O’Sullivan.

Today, the 416th continues to work on two Auto GCAS-related programs, which are the Automatic Integrated Collision Avoidance System and the Hybrid Flight Control Computer.

Auto ICAS is the integration of Auto GCAS and the Automatic Air Collision Avoidance System (Auto ACAS), and it essentially makes Auto ACAS ground-aware while still providing protection against aerial collisions. HFLCC introduces digital cards into the analog flight control computer of older F-16s, allowing them to run digital applications like Auto GCAS. The team also tests fixes to Auto GCAS issues that have been found in the field.

“For the 416th, the visit by the two pilots hammered home in a profound way how meaningful our work is,” Keithley said. “Often times, flight testers aren’t able to see the results of their work. Fortunately, last Thursday we got to see that up close and personal.”

The Air Force and Lockheed Martin are also looking at developing similar systems with the F-22 Raptor and F-35 Lightning II.