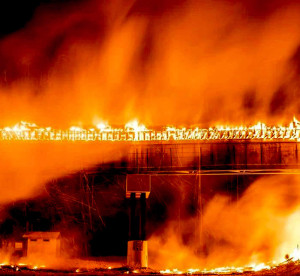 Flames consume a train bridge near Phelan, California, as the Blue Cut fire wreaks a swath of devastation recently. The fire burned more than 30,000 acres and forced the evacuation of more than 80,000 people.

Even while fires are raging all over California, and the smoke from some impacts Edwards Air Force Base, it may seem that the base is insulated from extreme fire danger due to the surrounding desert.

For one employee here, that was certainly not the case.

Len Paris, a heavy equipment operator with the 412th Civil Engineer Group, lives in Phelan, Calif., where his home and family were recently threatened by the Blue Cut fire.

He was at work when he first got word of the fire. “By the following day it looked like we were going to be just fine, but all of a sudden it took off again,” he said. “The winds changed, and that thing just started going at it once again.”

But rather than leave his home to the fate of the wind and fire, Paris opted to stay and help protect his and his neighbors’ homes.

“It wasn’t that far from my house,” he said. “We had the mandatory evacuations, but I chose to stay. I was on a tractor clearing shrubs, trying to knock down any excess vegetation around the houses.”

He said he also worked to help load and move his neighbors’ horses, and people’s valuables, photos and other things that can’t be replaced.

While he was busy defending his home and neighbors, his unit was back at Edwards offering their support to him.

“Mr. Herbert (Timothy Herbert, Paris’ supervisor) was good to go about it,” he said. “I have only been working here for about four months, so I didn’t know how these things work.” Paris said this is his first experience with government service. In the civilian sector, not coming to work for any reason will likely get you fired, he said.

“He said don’t worry about that side of it, just handle your family, take care of your place, and do what you can out there,” Paris said. “It put my mind at ease in that department. I was thinking for sure I was going to be up a creek without a paddle.”

He said that he didn’t do anything unusual, and that many of the areas’ residents were helping out.

“It was a really touchy situation for a while. I never saw a fire that bad since I’ve lived up there, but it was a neat feeling to see everyone come together and help everybody else out. I saw cavalries of trucks showing up to take horses to a safer place,” he said. “You could see just caravans of vehicles coming up to help evacuate people and their belongings.”