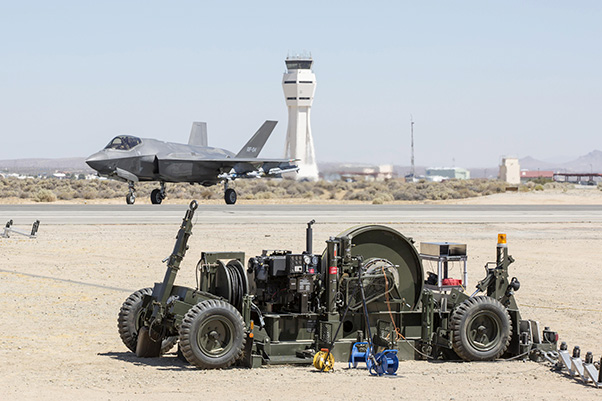 A Civil Engineer Maintenance Inspection and Repair Team, or CEMIRT, overhauled mobile aircraft arresting system, MAAS, is pictured on the runway with the approaching F-35A Joint Strike Fighter preparing to capture the cable with its tail hook. The MAAS was installed by the 820th Rapid Engineer Deployable Heavy Operations Repair Squadron Engineers from Nellis Air Force Base, Nev., and used during testing at Edwards Air Force Base, Calif.

MAAS that are past their recommended use time are overhauled as standard procedure. This particular MAAS came from Al Udeid, Qatar, where it had previously supported operations in the area of responsibility. Once the overhaul was complete, the MAAS was delivered to the 820th Rapid Engineer Deployable Heavy Operational Repair Squadron Engineer Unit, or RED HORSE, at Nellis AFB, Nev., in March.

The RED HORSE team travelled to Edwards recently to prepare the MAAS for use during F-35 runway landings and various stop testing events.

“If it wasn’t for the quick turnaround and newly overhauled MAAS from CEMIRT we wouldn’t have been able to complete the testing on schedule,” said Tech. Sgt. James Maxwell, a member of 820th RED HORSE Power Pro.

For testing purposes, the team used a 12,000-foot inside runway at Edwards to avoid impact on other flight operations. As part of the activity, the Joint Strike Fighter Integrated Test Force from Edwards conducted tests on the F-35A’s tail hook.

“In addition to operational requirements, MAAS can be used to support testing of tail hook airframes being introduced into the Air Force inventory as well as supporting contingency operations and support to airshows.”

Tail hooks are used to help jets stop when landing distance is insufficient or there is a brake malfunction or directional control issue. While tail hooks on the F-35 are designed for one-time use, the MAAS can be re-used multiple times before overhaul.

More testing is planned at Edwards in the coming weeks.