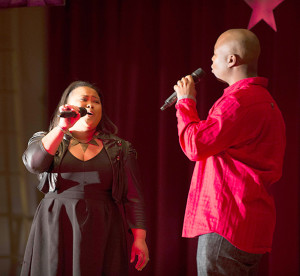 For the second time in three years, Operation Talent Search performers from Edwards Air Force Base, Calif., have won at the Air Force level.

The talent contest is conducted at bases around the world and gives Air Force communities the opportunity to showcase their talent…and Edwards is loaded with talent.

Performance DVDs of the Edwards winners were sent to the Air Force judges in San Antonio, Texas, to compete against other bases from around the globe.

One of this year’s Air Force-level winners was Kayla Williams, in the 16- to 18-year-old solo category. Kayla, 16, won second place last year but upped her game this year and won first place in her category, singing a Broadway song from the hit show “Thoroughly Modern Millie” called “Gimme Gimme.” Kayla isn’t the only one with talent in the Williams family, in fact, the whole family is quite gifted. The Williams family won first place in the Family Act category with their rendition of “Hallelujah.”

Lt. Col. Joshua Williams, 53rd Test and Evaluation Group, sang along with his daughters Kayla, Kami, 7, and Kallie, 3. In the meantime, daughters Kara, 11, and 9-year-old Kymber performed a ballet dance to the song while son, Kenny, played the piano. Not to be forgotten was mom, Tara, who cheered them on from the audience and was completely with them in spirit.

In the Husband and Wife category, Edwards had a second-place finisher, the husband-and-wife team of Tech. Sgt. Steven Eckles of the 412th Test Wing Chapel Office, and his wife, Karen. The Eckles took everyone back to an ‘80s prom night and sang in perfect harmony the hit song by Atlantic Starr, “Always.”

Because Edwards had three first- or second-place winners, it was just enough to push past Ramstein Air Base, Germany, as the overall winner with the most finishers. Because of that, the Edwards Teen Center won $1,500 for its program. Not only did the Williams and Eckles families win cash prizes for themselves, but they also helped the community win cash for Edwards teens.

For a full list of Air Force-level winners in each category, visit http://www.myairforcelife.com/Entertainer/OTS.aspx. Watch for auditions in the early spring of 2017 for next year’s Edwards Operation Talent Search. Come out and be a part of the show and maybe win some great prizes.
For more information, call the Teen Center at 661-275-TEEN (8336).