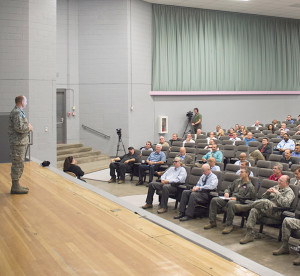 Brig. Gen. Carl Schaefer, commander of the 412th Test Wing at Edwards Air Force Base, Calif., took center stage at the Base Theater to discuss issues — past, present and future — during a civilian call Sept. 6.

The test wing’s top officer spent nearly an hour with the civilian workforce discussing milestones, priorities, personnel issues, safety and a variety of other subjects.

Schaefer set the call in motion by saying thank you.

“Thank you to what I think is the DOD’s best workforce — our workforce here at the 412th,” he said.

He then transitioned into recent milestones for the KC-46 and F-35 programs, and Team Edwards’ contributions to both.

“Over the summer, every one of you had a hand in enabling some key decisions for the Air Force,” Schaefer said.

In August, the KC-46A Pegasus program received Milestone C approval from Frank Kendall, the undersecretary of defense for acquisition, technology and logistics, signaling the aircraft is ready to enter into production.

“It’s our folks here and up in Seattle that are making this program happen for the Air Force,” Schaefer said. “When we go into combat, we don’t execute without tankers. It is critically important for us to project global power with our tanker force, and you’re part of that.”

“You enabled initial operational capability for the F-35,” Schaefer said. “That is huge. We haven’t gone IOC on a fighter in over 11 years, since the F-22 in 2005. It doesn’t matter what organization you’re in, you’re a part of making this happen for the Air Force.”

The commander then outlined test wing priorities and goals for the coming year. He showed a slide with the following:
* Agile mission execution that exceeds customer expectations
* Prioritize resources to support near- and long-term requirements
* Sustain and improve the installation and T&E infrastructure
* Recruit, develop, support and inspire a world-class workforce
* Enable innovation

Schaefer then talked about supporting these goals, touching on topics such as career advancement and development, the evolution of Edwards’ civilian personnel system, innovation, and community outreach to encourage students to focus on studies in science, technology, engineering and mathematics, commonly referred to by the acronym STEM.

“I want to know that we have a strategic plan for FY 2017,” Schaefer said. “The Wing is going in the right direction. We have goals, and we’re going to set actions to achieve these goals.”

He then discussed some of the ways to enable these goals – career development, mentoring, leadership and other resources for civilian employees.
“We’re pouring a lot of resources into our civilian development programs for education and training, and being able to apply that in your job,” Schaefer said. “We have a ton of resources for you. Make sure you’re engaging to capitalize on these resources.”

The general also spent time on the civilian personnel system Acquisition Demonstration, talking about upcoming changes that will affect employees here. “You have all been under AcqDemo for years,” Schaefer said.

“You’ll see a lot more information coming out of our civilian personnel office,” the commander said. “We’re here to answer your questions. Please get with your supervisors and make sure you fully understand what this means for you and your career development.”

Schaefer’s next subject was the Helping Agency Resources available to employees here.

“The Air Force has spent a lot of money making sure that we have the resources we need to be successful,” he said. He outlined many resources, including help with financial planning, family planning, spouse employment, resiliency programs, and exceptional family member services. He said it’s all about retention and recruitment.

“The expertise in this room is amazing, it’s humbling,” Schaefer said. “And this is about retaining our folks, making sure that you all – the national treasures that are in this room – are feeling taken care of by the Air Force.”

The commander then shifted focus, talking briefly about safety. The office of Ground Safety has changed to Occupational Safety, and after a short video on the subject Schaefer again praised the civilian workforce.

“I am very proud of the culture of safety that we have instilled,” he said. “The continuity is our civilian workforce. That makes us extremely safe.

Innovation was also a topic the commander stressed.

“It’s about staying one step ahead of the enemy. That’s what Edwards is all about – having that next innovative idea that helps us either with combat capability or the things that support combat capability for our country. If any place should be innovating, I think it should be Edwards.”

One of the final subjects of the call was STEM, an outreach program to develop and recruit future employees for the 412th Test Wing.

“We have an aging workforce. A lot of folks are eligible for retirement now and more will be over the next five years,” Schaefer said. “We need to recruit the best and the brightest, in engineering and in other fields across the wing that require a technical background.” The STEM outreach volunteers work actively in high schools, community colleges and college campuses. People who are interested in volunteering may call Humberto Blanco at 275-9208.

The wing commander wrapped up the session with another thanks to the civilian workforce here.

“I just want to say thank you,” he said. “Thank you for giving everything for your country, for the things that you do day in and day out to support and defend the Constitution of the United States, and to deliver war-winning combat capability to your nation.”