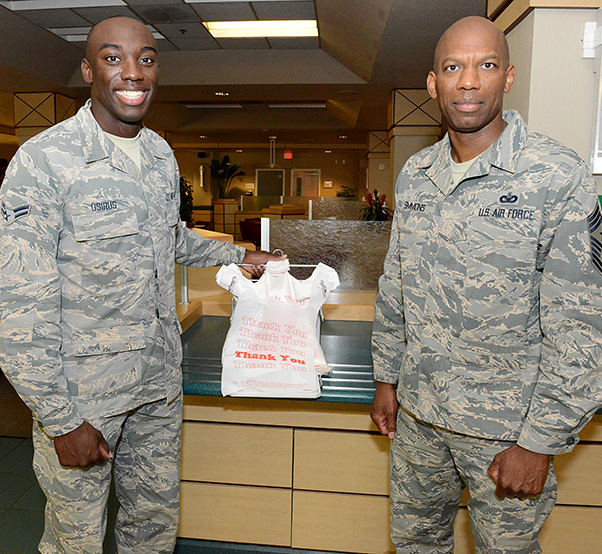 It was easy for Airman 1st Class Gabriel Osirus III to see.

The 412th Medical Group Mental Health technician eats at the Joshua Tree Inn Dining Facility at Edwards Air Force Base, Calif., regularly and noticed some of his fellow Airmen having trouble.

“When you get food to go, sometimes you have to stack up the boxes and then you have a little salad dressing container on top of that. I see a lot of people needing help opening the door,” said Osirus.

“People were dropping their food or having to make separate trips to their car if they had multiple boxes. I just thought it’d be nice if we had bags we can put our food in.”

Many Airmen pick up multiple boxes of food to bring to their wingmen at their units, which can be cumbersome and risky during windy days.

When Chief Master Sgt. Todd Simmons, 412th Test Wing command chief, came to visit the 412th MDG mid-August, Osirus stood up and suggested the bag idea to him during a question-and-answer session.

“We have the smartest Airmen coming into the force today, even more than when I came in,” said Simmons. “We (wing leadership) want them to use their brains and pass along ideas. If they see a need for the Airmen, let us know.”

The chief talked to the 412th Force Support Squadron, and after some paperwork and approvals, plastic bags are now available at the dining facility.
For his idea that came to fruition, Osirus was congratulated by Simmons and given a 412th Test Wing coin.