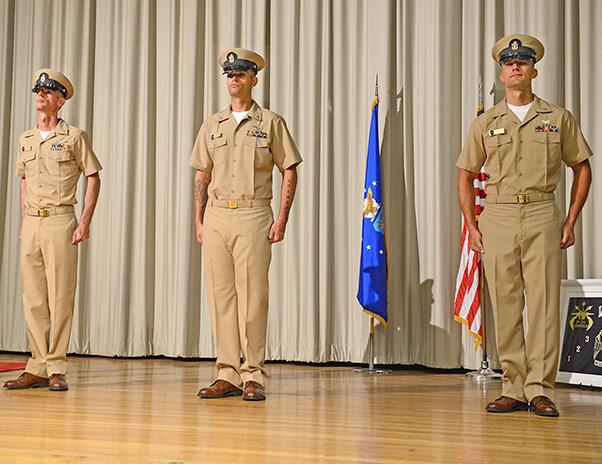 Left to right: Chief Petty Officers Richard Crapser, Lawrence Borba and Justin Sexton don their new khaki uniforms and CPO combination covers after pinning on their anchors to officially become U.S. Navy CPOs at the base theater Sept. 16, 2016. Almost 5,000 Sailors across the Navy pinned on the rank of CPO last Friday.

Chief petty officer, enlisted grade E-7, is the first rank of the senior noncommissioned officer corps for the Navy.

At Edwards Air Force Base, Calif., a ceremony was held by Air Test and Evaluation Squadron NINE Detachment Edwards, designated VX-9 Det. Edwards, at the base theater. The “Vampires” watched as three of their own donned their new khaki uniforms and pinned on their anchors to officially become CPOs. Richard Crapser, Lawrence Borba and Justin Sexton were introduced as VX-9’s newest chiefs.

The ceremony concluded CPO 365 Phase II, a training period that began following the announcement of the Navy’s CPO advancement results Aug. 3. During the last six weeks the chief selectees were put through a series of trials by senior leadership in order for them to learn how to think and act like a chief.

Although on a U.S. Air Force base, the ceremony was carried out in traditional Navy fashion with the new chief selectees entering the theater marching and singing the Navy Song, “Anchor’s Aweigh.”

After introductory speeches, the chief selectees stepped forward individually to have their gold fouled anchors pinned on their collars by family members and the combination covers of a chief petty officer placed upon their heads.

On Sept. 16, 4,765 Sailors across the Navy pinned on the rank of chief petty officer.

VX-9 Det. Edwards has approximately 120 Sailors and is charged with the testing and evaluation of the Navy’s F-35C Lightning II and its related systems in direct support of the United States Naval Aviation Fleet.