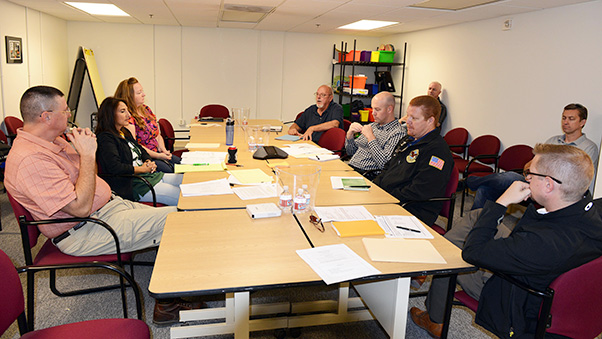 THINK TANK: Members of the 412th Test Wing Innovation Team discuss a proposal involving solar-powered attic fans that could reduce energy costs at Edwards. The team met Sept. 23, 2016, in the Innovation Center, which is located on the bottom floor of the dining facility.

The 412th Test Wing Innovation Team at Edwards Air Force Base, Calif., is always looking for a few good ideas, and it may have received one Sept. 23,2016.

Jack Frazier from the 412th Civil Engineering Group proposed that the base install solar-powered attic fans in buildings on base.

Frazier is a resource efficiency manager for the 412th CEG and pitched the idea as a way to save the base money on energy bills, which are a significant cost not only to Edwards, but the Air Force as a whole.

Frazier explained how the solar-powered attic fans will remove excess heat in attic air spaces by ventilating the space above ceilings, making work areas more comfortable while putting less strain on air conditioning units. The fans are automatically activated by a thermal switch that turns on and off at certain temperatures.

“During the peak summer months, an attic’s temperature can rise to 160 degrees or more,” Frazier said during his presentation, which was given in the Innovation Center located on the bottom floor of the Joshua Tree Inn Dining Facility.

“This heat build-up can then raise the temperature inside the office and work spaces and increase the amount of electricity used by air conditioners and other cooling equipment,” he said.

According to Frazier, purchasing and installing the solar attic fans is relatively cheap. The purchase and installation of four fans can be paid for through energy savings within a year he said. Another benefit is that the fans can be installed without putting holes in roofs.

The Innovation Team discussed the feasibility of the attic fan project and agreed to elevate the idea to wing leadership to possibly fund a test project for the fans.

People who have an innovative idea can meet with members of the 412th TW Innovation Team during their weekly meet-up, 9-11 a.m., Fridays in the Innovation Center located on the bottom floor of the Joshua Tree Dining Facility, Room 103. For more information contact T.J. Wuth at theodore.wuth@us.af.mil, or call 661-275-8217.