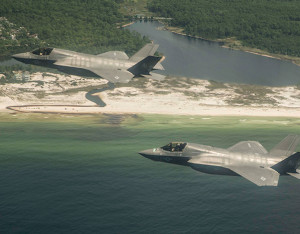 This was the second detachment of F-35s from Edwards to Eglin to complete operational test missions.

This detachment brought three Marine Corps F-35Bs from the Marine Operational Test and Evaluation Squadron 1 F-35B Detachment at Edwards, or VMX-1, to Eglin in support of Block 2B/3i Air-to-Air and Air-to-Surface weapons testing. The testing culminated in five live-fire events when instrumented AIM-120s were fired against QF-16s from the 82nd Aerial Targets Squadron and 53rd Test Support Squadron from Tyndall AFB, Fla.

These missions fulfilled test requirements directed by the commanders of both the Air Force Test and Evaluation Center and the Navy’s Operational Test and Evaluation Force and will provide critical information to the warfighter about the F-35’s combat capability against a robust cross section of threats.

But to successfully pull these critical test missions off, it required close coordination from a broad collection of units.

Critical to the success of the test missions was the support of the 96th Test Wing, 33rd Fighter Wing and the 53rd Wing, said John Pearson, JOTT test director. The 96th Range Control Squadron and the 780th Test Squadron provided the personnel and control facilities to enable use of the airspace and test ranges. Hours before a missile was fired from an F-35, workers from the 96th, 780th ,82nd aerial targets squadrons, 53rd TSS, and Raytheon Missile Systems ensured all required test assets were mission ready and that safety requirements for the range were met, Pearson said.

“The support provided by the Eglin AFB team of professionals working hand in glove with the JOTT experts has ensured the success of the JOTT Block 2B/3i Air-to-Air weapons testing,” Pearson said. “There is no doubt that without their flexibility in getting the mission accomplished with strict adherence to test safety and execution procedures, we would not have been able to get all of our events done…We appreciate their great teamwork,” he said.

Once the mission was underway, the coordination of disciplined efforts from all units teamed together to achieve mission success, Pearson said.

“None of this happens without the dedication and skill of Eglin and Tyndall AFB”, said Kurt Hall, lead test conductor for the JOTT.

The detachment was hosted by Strike Fighter Squadron VFA-101 from the 33rd FW, which provided secure working areas, maintenance, logistical and IT support for the 110-person test team.  There were no test missions lost due to a lack of mission-capable aircraft, a testament to the professionalism of the VMX-1 maintainers and the support received from the host units, Pearson said.