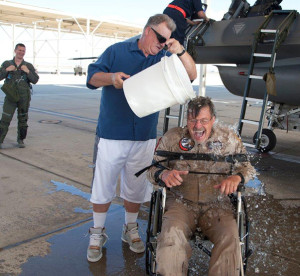 Lockheed Martin aerial photographer, Tom Reynolds gets a cool wash down from neighbor Jim Tholen as Test Pilot Maj. Sean Richardson watches on, during Reynolds’ fini-flight celebration. For more than 30 years Reynolds covered testing of the YF-22, F-22, X-35 and F-35. He has more than 1,800 hours in the F-16 and hundreds more in the F-15.

Lockheed Martin aerial photographer Tom Reynolds didn’t have a clue that saying yes to a temporary, year-long assignment would turn into a 33-year career at Edwards Air Force Base, Calif.

“Brown was not my favorite color back then and still isn’t, there wasn’t much to like about the Antelope Valley in the early eighties,” confesses Reynolds.

Working as a freelance photo/videographer for General Dynamics, he soon discovered that Edwards Air Force Base was a pretty unique place.

“I still longed to go back home in the ‘promised land’ of Fort Worth, Texas. I never thought in a million years I would ever call this place home, and then I met Airman 1st Class Linda Christianson who was photographing a bomber on the flight line,” recalls Reynolds.

They were married in Chapel Two and their two daughters, Cassaundra and Stephanie, were born at Edwards. “It didn’t take long for the Antelope Valley to become home.” 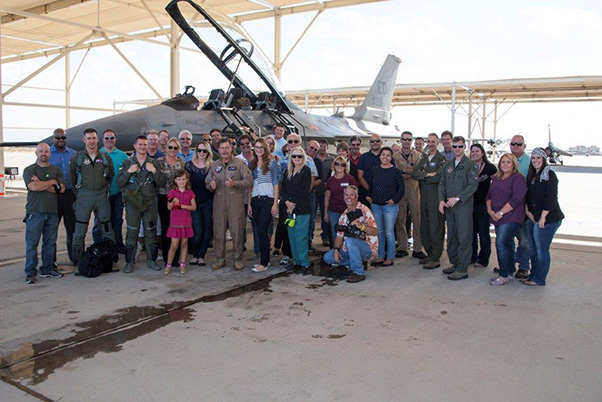 One big family — Members of Edwards Air Force Base come to celebrate Lockheed Martin Aerial photographer Tom Reynolds’ last flight in an F-16. Reynolds came to Edwards from Fort Worth, Texas, for a one-year contract that lasted more than 30 years.

Flying in the back seat of chase planes, photographers capture video and still images that provide insight into test flights that can’t be acquired any other way. Documenting how a bomb falls away or how a missile leaves the rail is a critical part of testing.

Extensive training is required by the Air Force and Edwards before someone is allowed in the backseat of high performance aircraft. Mission aircrew attend altitude chamber training, land survival, water survival, parachute and specialized equipment training.

However, there are some things that no amount of training can account for. On his first flight he was too excited to get sick; however, it was the next 30 flights of throwing up, down and sideways, that made him think that perhaps, flying wasn’t so special after all.

“One day I had a flight in which I returned with my stomach contents not in a bag and a dawning realization began from that point,” explains Reynolds. He appreciated what a fighter is capable of, that test pilots are phenomenal operators of not just an aircraft but a whole host of equally complex systems. There are so many people who build and maintain the fighters and people in life support and those on the ground. “It hit me — Wow! This is pretty incredible.”

Heading up a crew of photographers for Lockheed Martin, he has had his last flight but will continue to work at the F-35 Integrated Test Force until retiring next year.

“I work with some of best photographers in the industry. Their skill level is outstanding but what makes them so special is who they are as people — their integrity and work ethics. My friends are what I’m truly going to miss when it comes time to leave.”

“Working with Tom is enjoyable,” said fellow photographer Chad Bellay. “His morning, heavily profanity driven, computer tantrum will never get old! The office will not be same without him. 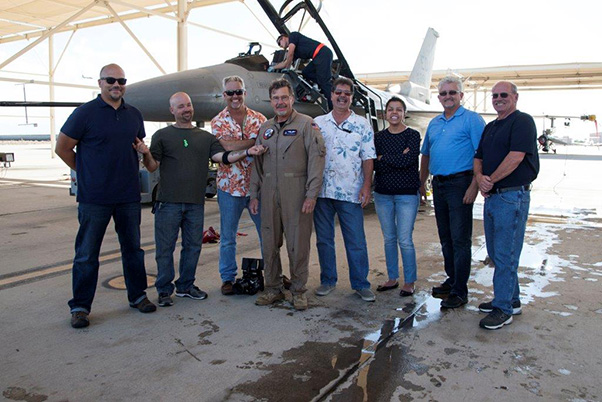 “I have great respect for him as a coworker and a friend,” Bellay continued. “I’m very thankful to have worked alongside him these past years and owe him a lot for taking a chance and helping me get on at Lockheed.”

Never having an actual call sign, fellow photographer Darin Russel fondly refers to him as Yoda, Flanagan and the Old Guy. “Tom is a legend, my mentor, my friend and one of the best bosses I’ve ever worked with.”

Neighbor, Jim Tholen who is a construction coordinator for Union 44 out of Hollywood and travels the world building multi-million dollar movie sets.

“I thought Tom just took photos of airplane parts. He has to have the coolest job ever — how come he never talks about it?” asked Tholen as he was walking to the flight line for the landing celebration. “Until today, I had no idea what went on at Edwards. This is unbelievably cool. If I was Tom, I would be high-fiving people all day.”

Pilots and co-workers you read about in books, such as John F. Fergione and James Brown III, have turned into life-long friends and were present at the fini flight.

“I wouldn’t have missed this for the world,” says Fergione, who has flown hundreds of hours with Reynolds in his back seat, stood up in his wedding and taught his daughters to swim. Fergione is a retired Navy captain, and F-16 and F-22 Test Pilot. When he isn’t busy serving as president of the LA County Air Show, he is busy planting Reynolds’ excess flowers in his own garden.

Reynolds’ photographs adorn the hallways of many buildings at Edwards yet only a painting of the cover shot of “Breaking Free,” a book about the photography of his friend, the late Judson Brohmer, hangs in the entry way of his home.

“I’ve hit him up for years for photographs but we still don’t have any. I was surprised to see all the galleries at Edwards. Maybe when he retires he will bring one home,” says his wife Linda, who painted the picture. She doesn’t blame him for not wanting to retire. “He does work with the coolest people.”

Over the years Reynolds has lost dear friends in the business and any fighter crash around the world hits too close to home. “When I look back, I really don’t know where the time has gone. Good times, bad times, crazy busy times — it definitely has been an incredible ride.”