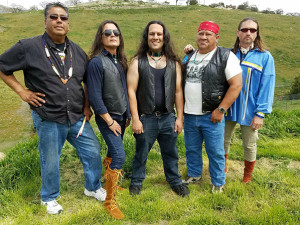 Their only recording hangs on their producer’s wall among such names as Eric Clapton, Rod Stewart, Gene Simmons and Joe Bonamassa, but they aren’t nearly as well-known.

The band’s first and only album, “All My Relations,” was recently named Best Blues Recording at the 2016 Native American Music Awards.

They are Blue Mountain Tribe, a blues rock band based in Tehachapi, Calif. The band’s five members are all Native American, and three are members of Team Edwards.

The album was one of 824 submitted for consideration, and among six nominated for the award.

According to Mata, the band didn’t really expect to win, but when they did things really started taking off.

“We were told by people all over the music industry that another band that was going to win. They tour all over the world, and they’ve got five CDs out. We have one CD out, and we haven’t left the United States, so we figured they were going to win,” Hairston said.

“This is a big deal — bigger than we thought. Things are happening fast,” Mata said. “After you win a big event like this, you get lots of attention.”

Bubba Hairston said there were multiple magazines interested in the Blue Mountain Tribe story, and that the band’s schedule was filling up quickly.

“They’re considering having us play at NAMA in New York City next year,” Hairston said.

Hairston said he was planning to travel to New York to represent the band at the NAMA ceremony this year, but situations changed and he opted do something else with the money he’d saved for the trip.

“They’re building a pipeline through Indian territory and burial grounds,” he said. “They (Native American protesters) were without food, water and diapers, just the necessities to survive.”

Hairston said they decided to donate the travel money to the people of the Standing Rock, S.D., protest.