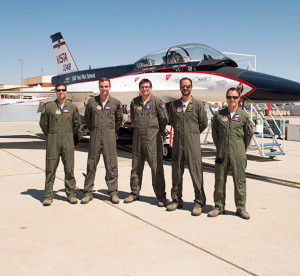 Students at the U.S. Air Force Test Pilot School at Edwards Air Force Base, Calif., recently completed testing of an innovative aircraft control system that is intended to add a margin of safety to aviation.

The L1 Adaptive Control System is a software system that, when installed as a backup system in any fly-by-wire aircraft, can quickly learn the aircraft’s flying characteristics and then assist the aircraft in case of a control surface or system failure.

It was designed and built by a professor and two graduate students from the University of Illinois, Urbana Champaign and tested here by a team of TPS students from class 16A.

“In order to get a master’s, you need to do a project of some sort,” Cotting said. “Typically you do a master’s thesis. We have our students do a group project. The idea is we want them to take the lessons they’ve learned in how to plan and execute a flight test and actually go do that.”

Since the controller is adaptive, and designed to function on any fly-by-wire aircraft, the traditional flight test process could have been expensive and time consuming. So the class opted to test the system using the NF-16 Variable-stability In-flight Simulator Test Aircraft, known as VISTA.

VISTA is a highly modified F-16 that can simulate the flight characteristics of many other aircraft.

For example, if the aircraft is configured as a C-17, when the pilot operates the flight controls, the aircraft will respond like a C-17, not an F-16.

“We can make the aircraft fly like anything we want within its performance envelope. We have safety trips on it so if the aircraft goes to an attitude we’re uncomfortable with it will trip off and a safety pilot will have the original aircraft to fly safely,” Cotting said.

“This allows us to put research flight control laws on there without having to go through the normal flight test process so we can literally go from basic design, test in a simulator and go fly all in the same day, as opposed to the months it would take to go through normal process,” Cotting said. “From a researcher’s point of view, you can see where that could be very advantageous.”

According to Cotting, the L1 controller is a somewhat novel idea in that it doesn’t have to know what the airplane is like that you’re putting it on.

“You give it some basic information about the airplane and the adaptive controller should be able to configure itself to make the aircraft fly like anything I tell it I want to fly like,” he said.

Part of the process was to install the controller on VISTA and see if the team’s performance predictions were accurate. “We also wanted to test some different configurations of VISTA that are normally unsafe to fly and see how well this controller can recover the aircraft back to a reference set of dynamics that we do think is safe to fly,” Cotting said.