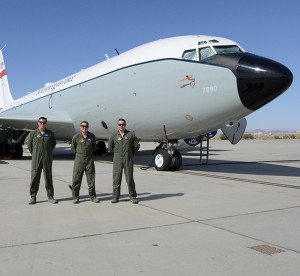 Earlier this year in Everett, Wash., workers from the 418th Flight Test Squadron, Detachment 1, and Boeing teamed to achieve major test milestones for the KC-46 Pegasus aerial refueling tanker, which resulted in the Department of Defense authorizing initial production in August.

Going forward in the test program, the KC-46 will complete a robust schedule of Federal Aviation Administration and military certification flight testing, including refueling test flights, in order to achieve certification for aircraft in the Air Force and Department of Defense inventory.

As with all aerial tankers, the plane requires an Airman to operate the refueling boom that transfers gas to receiver aircraft.

To date, boom operators from Edwards Air Force Base, Calif., are the only Airmen to have flown the boom on the KC-46 and are paving the way for future testing and training with the new system.

He and Master Sgt. Aaron Ray of the 370th FLTS are the first two Airmen in the Air Force Reserve ever to be qualified on the KC-46.  They have recently been joined by Tech. Sgt. Colin Wernecke who transferred to the reserve after spending three years with the 418th FLTS in Washington.

The 370th FLTS is an Air Force Reserve unit with the mission of providing aerial refueling test support to the Edwards 412th Test Wing.

“When you compare the KC-135, a tanker that was developed in the 50s and uses a lot of 1940s technology when it comes to the boom system, and you think about the new systems that we’re dealing with today in the KC-46, it’s a huge difference,” Scurlock said.

One of those huge differences is the new location of the boom operator’s workplace.

“We have transitioned from laying down on your stomach or sitting at the back of the airplane, looking out a window at receiver aircraft, to sitting up front in the airplane at an air refueling operators’ station looking through a 3-D stereoscopic vision system,” said Wernecke.

The new vision system is designed to replicate depth perception under all lighting conditions, he said.

“Aspects, such as lighting, have been designed into the AROS to make operating the boom easier.  Lighting shouldn’t play as big a part with the new remote vision system. They’re able to utilize cameras in such a way that conventional external lighting from the tanker looking down on the receiver doesn’t play as big a part.  While operating legacy systems, you have to adjust your lights to allow the boom operator to gain depth perception in dark environments,” Wernecke added.

“The control and operation of the boom is similar, but the boom handling qualities are improved drastically,” said Scurlock.

Scurlock and Wernecke said the KC-46 boom operators from the 418th and 370th FLTS are providing feedback to Boeing to help with training and further development of the new tanker boom system.