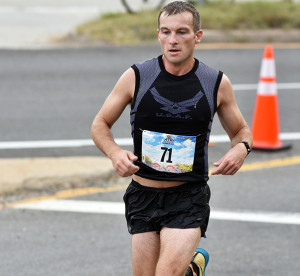 Some 22,000 runners competed in the 41st Marine Corps Marathon held Oct. 30 in Washington D.C., an event that since 1998 has served as the Armed Forces Championship.

One of Team Edwards’ own helped the Air Force to a second-place finish among the four armed services.

The military men’s teams consisted of six runners each with the top four finishing places on each team added up at the end. The lowest combined-finish-position total wins.

This year’s race began at the Pentagon, wound through Arlington, Virginia, the District of Columbia and ended near the Marine Corps War Memorial in Arlington, beside Arlington National Cemetery.

Kelly submitted an application to Air Force Sports (www.myairforcelife.com/sports/). They reviewed his previous performances and selected six men and four women to represent the Air Force on its marathon teams.

“I try to run 50-70 miles a week. It really depends on how busy my work week is. I also do triathlons during the summer months to take a break from running and to prevent injury,” he said.

The Air Force won the silver medal during the Armed Forces Championship with the Army taking first place and the Navy earning the bronze medal. The Air Force Women’s Team finished third among the armed services.

“I was proud to represent the Air Force and compete against the Marine Corps, Navy and Army. It was also a very unique opportunity to run on the same team as some of the top runners in the Air Force.”

For a complete list of winners and finishers visit http://armedforcessports.defense.gov/Media/News-Stories/Article-View/Article/994730/army-sweeps-mens-and-womens-armed-forces-marathon-kosgei-wins-second-marine-cor/.