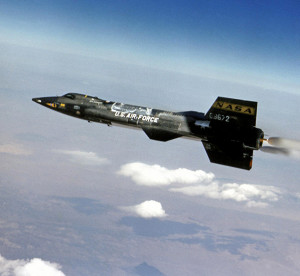 The X-15A-3 rocket plane flies over Edwards Air Force Base during a mission in the 1960s. The aircraft crashed in 1967, killing pilot Maj. Michael J. Adams. According to a NASA report, the X-15A-3 crashed “due to a stable, albeit non-robust adaptive controller.” The U. S. Air Force Test Pilot School recently validated a much more robust adaptive controller which was built by a team at the University of Illinois Champaign Urbana. The controller is designed to adapt to any fly-by-wire aircraft.

A recent test management project helped not only to validate an adaptive flight control system, but provided valuable educational experience to military and university students.

The L1 adaptive control system was developed and built by a professor and students at the University of Illinois at Urbana-Champaign, and tested by a team of students at the U. S. Air Force Test Pilot School at Edwards Air Force Base, Calif.

According to Dr. Chris Cotting, TPS solicits government customers and academia looking for different sorts of projects and ideas that they would like to have flight tested.

“We tell them, basically, ‘You give us your concept, and we’ll bring it in and flight test it right here at the school.’”

“We provide flight hours, planning, data processing and reduction for someone who might have an idea that they couldn’t figure out how to put on an airplane and flight test otherwise.”

Hovakimyan said her team developed the system primarily with unmanned or remotely piloted vehicles in mind. “The technology is developing rapidly,” she said. “Wind tunnel testing for each model and variant would be cost-prohibitive.

“The goal was to develop a controller that would adapt to changing conditions, compensate and provide predictable performance,” she said.

Cotting said the professor had spent a lot of time working on the theory but had not been able to actually see how the controller performed during flight test.

Adaptive control systems are not a new concept, according to Hovakimyan. One of the first tested, in 1967, was unsuccessful and killed the pilot. This was the X-15A-3 piloted by Maj. Michael J. Adams. According to a NASA report, The X-15A-3 crashed “due to stable, albeit non-robust adaptive controller.”

Since then, the systems have been refined, and in 1997 the L1 system had its first successful test with an X-37 aircraft, she explained.

“The challenge is how to adapt and maintain robustness in the control system,” Hovakimyan said.

Essentially, robustness is the measure of the control system’s ability to still do its job adequately under adverse conditions, Cotting said. “We use robustness margins to pre-determine how different the aircraft can be from the model we use to design the control system,” he said.

The teamwork between TPS and the university has further demonstrated the benefits of the adaptive control systems in regards to aviation, but the benefits to the students are also substantial.

Students at TPS earn a master’s degree in flight test at the completion of their course. But to do that they have to complete a test management project, the equivalent to a thesis.

The Test Pilot School students benefit by having the opportunity to test advanced theory, Hovakimyan said.  “The educational benefit for university students is they get to work with TPS, developing methods with real vehicles and creating real test points. They’re faced with real-world challenges,” she said.