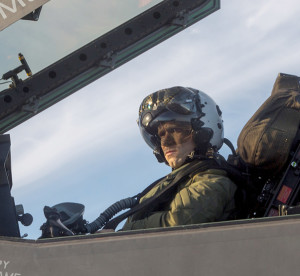 When the Department of Defense launched the acquisition process for the revolutionary F-35 Lightning II, they envisioned a common platform across three variants that ultimately invigorated the defense industry worldwide, creating an influx of new technologies — notably the F-35 helmet.

A vital element of the F-35’s unprecedented warfighter capability, the helmet’s ground-breaking technology equips the pilot with mission-critical information on the helmet’s visor; resolves well-documented fit, comfort, and convenience problems associated with helmets worn by pilots of legacy aircraft; and fuses the F-35’s cutting-edge communications and sensor suite to form a clear picture of the operating environment. This gives F-35 pilots unrivaled situational awareness and a decisive advantage over adversaries.

The latest iteration — known as the Generation III helmet — is also easily realigned and readjusted based on the individual pilot’s needs, whereas previous legacy F/A-18 Hornet and Super Hornet helmets are rigid, cumbersome, and require manual upgrades.

Fabricated with its own Display Management Computer Hardware operating system, the helmet enables pilots to toggle through different modes of data visualization. It also delivers a more efficient video feed than the F-35’s Generation II helmets — equipping pilots with symbology correlated inside the cockpit, as well as outside the aircraft with the use of the Distributed Aperture System (DAS). Using multiple DAS cameras installed peripherally around the aircraft, the pilot is able to display various modes of imagery such as thermal, night vision, and actual, and achieve an unprecedented look-through-aircraft capability.

All modes are beneficial to pilots as they deliver a clear 360-degree picture during daylight and lowlight settings. Thermal images portrayed through DAS enable pilots to view heat signatures emitted by various objects. For instance, a pilot can identify a ship running a hot engine against the vast darkness of the cold ocean. Night vision can also assist in magnifying low-visibility objects against areas of very little to no light.

“In addition to the aircraft’s flight symbology, I can display tactical data and even live, night vision video,” he added. “The helmet helps me find friendly and enemy aircraft, locate targets on the ground, and can even point out the ship. It is fully integrated into the aircraft systems, and enables a seamless transition between tactical display and the outside world.”

Another problem with JHMCS legacy helmets is the graphics on the display visor, which block the pilot’s ability to see through an overly bright image. Engineers worked to refine this imagery on previous iterations of the Generation III helmet, and now the latest helmet enables pilots to toggle through several gradients of opacity. The pilot is also able to devote less time switching through different modes, and doesn’t have to physically install night vision goggles before starting a night mission because the Night Vision Device (NVD) is built in.

“Legacy systems are often limited to a fixed, heads-up display or separated into several systems — targeting helmet, night vision goggles, heads-up display, etc.,” Dirk said. “The F-35 helmet integrates all of these capabilities and more into one balanced and comfortable helmet, complete with active noise reduction.”

These technological advancements of the F-35 Generation III helmet will save military expenditures due to several new factors.

The use of laser-scanning technology creates an exact replica of a pilot’s skull, thereby fabricating a portable styrofoam helmet liner that is a breakthrough above and beyond the traditional, custom-designed helmet for each pilot. This styrofoam cap fits into any size helmet, enabling a pilot to take the helmet liner from squadron to squadron for use throughout his or her career, optimizing the flexibility of the pilot flight equipment inventory, eliminating risk of damage to helmets during squadron transitions, and reducing investments in large inventories of helmets.

As the pilot dons the cap and helmet, two ocular cameras situated above the helmet’s display visor are manually aligned to his or her interpupillary distance (IPD) settings for each eye to ensure the acuity of each pilot’s vision and establish the proper fit of each helmet.

“The helmet is definitely well worth it considering what it brings to the fleet, the capability it brings to the war fighter who keeps us safe, and how it equips all of the pilots,” said Smith, referring to the clear, 360-degree picture of the battle space the helmet delivers.

This unrivaled situational awareness equips the pilot with an unparalleled ability to dominate the tactical environment. Likewise, commanders at sea, in the air, or on the ground immediately receive information collected by the F-35’s sensors via data link — empowering them with an instantaneous, high-fidelity view of ongoing operations, making the F-35 a formidable force multiplier while enhancing coalition operations.

Additionally, legacy aircraft only displayed targets on screens installed inside the actual cockpit, creating a disadvantage because pilots would have to turn their heads away from their surroundings. Now, F-35 pilots can focus on their targets via the Generation III helmet display visor. This empowers them to keep track of adversaries farther than they could ever turn their heads.

“You can’t put a price on the blanket of freedom that this aircraft will deliver,” Voegeli added. “The threat of any adversary who wishes to bring us harm is ultimately the reason to test this next generation fighter jet. The moment this aircraft is put in the fight, all questions will come to an end.”

The quantity of specifications in this piece of revolutionary equipment showcases the DOD’s integration of pilot equipment with its next generation strike fighter, its focus on warfighter performance and pilot safety, and its ability to inspire technological advancements that ensure U.S. air combat superiority for generations to come.