When it comes to aviation fuel, the C-17 Globemaster III utilization rate makes it stand out as the largest consumer in the U.S. Air Force.

This is why a team at the 418th Flight Test Squadron, Edwards Air Force Base, Calif., has been working for the past year on the Air Force Research Laboratory’s C-17 Drag Reduction Program.

The 418th FLTS is currently wrapping up testing with the final three phases — out of five total — using 3-D printed parts by Lockheed Martin. The Lockheed Martin installations use a combination of laser positioning for locating and sealant to bond the parts to the aircraft.  The laser positioning allowed the team to skip the design and build of installation tooling that would only be used during flight testing according to test managers. The bonding simplifies the installation and more importantly leaves the aircraft in its pre-test condition after removal at the end of the flight test program.

The squadron is testing parts in various configurations to see if the external structure modifications can improve airflow around the airplane. During computational fluid dynamics simulations and wind tunnel tests, areas on the C-17 were identified that showed excessive drag and were targeted for optimization.

In the spring, the first two phases of testing were completed. Those tests were conducted with two different configurations of parts made by Vortex Control Technologies.

The placement of the parts and the different configurations all have the same goal of reducing drag and improving fuel efficiency.

Currently, the team is preparing to test the fifth and final configuration using the Lockheed Martin parts. They have recently tested the third and fourth phases, which consisted of placing 12 microvanes toward the aft of the C-17 for phase three and then adding three fairings to each wing for phase four. 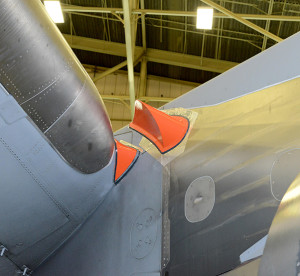 The fifth phase will keep the 12 microvanes and six-total fairings with the addition of two fairings on each winglet.

At least three flight tests are conducted with each phase — a flying qualities regression flight and cruise performance flights at .74 and .77 mach.  The team will also conduct airdrop tests in December to ensure the microvanes do not interfere with the C-17’s airdrop mission.

The flights are always the same to make certain the data collected in each phase can be accurately compared to each other. The 418th FLTS is also using the same C-17 for all the flights. The plane is on loan from Joint Base Lewis-McChord, Wash., along with four maintenance Airmen.

Flight data is collected and put into a computer program developed by Boeing that puts out parameters for lift and drag and then compares everything to see how much drag is reduced. 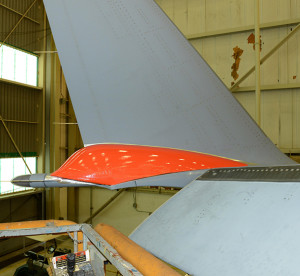 For phase five of C-17 Drag Reduction testing, two fairings will be placed on each winglet. One winglet fairing is located at the wing to winglet transition (shown) and the other fairing is located on the upper inboard side of the winglet. The winglet fairings will be added to the six wing pylon fairings and 12 aft fuselage microvanes of the aircraft used in phase four tests. All the test articles are 3-D printed by Lockheed Martin and bonded to the aircraft by Boeing contractors.

The flight tests here are the final stage of AFRL’s program following computational fluid dynamics simulations and wind tunnel tests with a scale model. The data collected will be sent to AFRL at Wright-Patterson Air Force Base, Ohio, to see if any of the modifications increase streamlining and reduce drag. After that, Air Force leaders will ultimately decide whether or not any of the modifications should be implemented throughout the C-17 fleet.

The test team at Edwards consists of 412th Test Wing personnel, Lockheed Martin and Boeing contractors along with representatives from Canada, the United Kingdom and Australia, who have a stake in the program.

The final flight for the C-17 Drag Reduction Program is expected to happen in December.