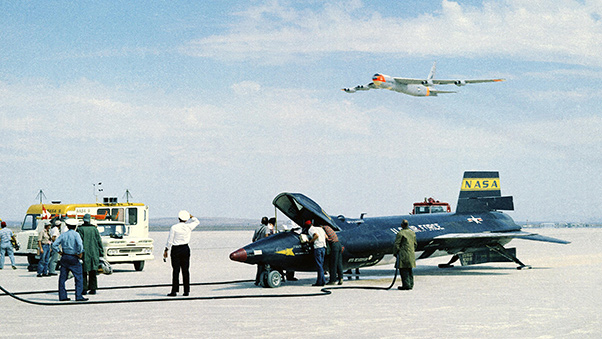 X-15 number 61-0034 sits on Rogers Dry Lake here as the B52 flies overhead in September, 1961. The 412th Test Wing’s Hypersonic CTF was involved in the testing of this aircraft, and has been operating at Edwards Air Force Base since the 1950s. The command of the Hypersonic CTF was shifted to Arnold Air Engineering and Development Center in Tennessee Thursday. The change is intended to streamline the functions involved in hypersonic research and flight test, from modeling to wind tunnels and ultimately flight test.

The Hypersonic Combined Test Force here saw a shift in leadership Dec. 1`, as oversight of the unit was transferred to the Arnold Engineering and Development Complex, Arnold Air Force Base, Tenn.

According to Maj. Dick Wong, director of the Hypersonic CTF, the change was directed by Maj. Gen. David Harris, Air Force Test Center commander, to streamline the functions involved in hypersonic research and flight test, from modeling to wind tunnels and ultimately flight test.

“This will make coordination across the hypersonic research enterprise more synergistic,” Wong said.

Since the 1950s, this small unit has operated at Edwards Air Force Base, testing the boundaries of speed. The Hypersonic CTF has been involved in the testing of cutting-edge, high-speed aircraft, including the renowned X-15 program during the 1960s and, most recently, the X-51 WaveRider.

The X-51 unmanned scramjet aircraft’s maiden flight was completed on May 26, 2010. The aircraft remained under powered flight for over 200 seconds at a top speed of Mach 5.

The CTF hasn’t been limited to hypersonic testing throughout its history.

“There have been many name changes over the years,” Wong said. “Before it was the Hypersonic CTF, it was called the Access to Space Office, for example.’”

As the former name suggests, the CTF does support some space-oriented projects. In the early 2000s, the X-38 Crew Return Vehicle was one example.
The X-38 project was a series of five prototype research vehicles developing technology to build and operate a space station CRV. The wingless CRV, when operational, would have been the first reusable human spacecraft to be built in more than two decades.

The CTF director explained that the work performed here is different from the flight testing traditionally performed by the 412th Test Wing. The Hypersonic CTF partners closely with entities such as NASA, the Air Force Research Laboratory and the Defense Advanced Research Projects Agency. 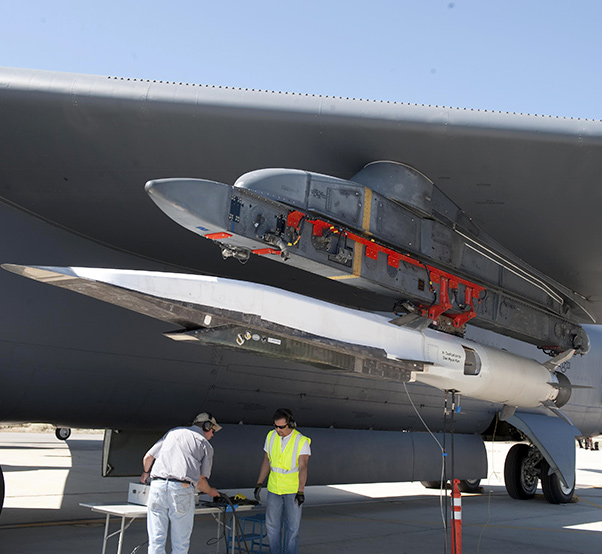 Ground crew members make the final checks to the X-51A Waverider scramjet, which is affixed to an Edwards B-52H Stratofortress before being flown over the Pacific Ocean and launched June 13, 2011.

“Some of our projects are research and development oriented,” he said. “We can spend five to seven years working on a project for one or two flight tests.”

Because of the research and development mission of the Hypersonic CTF, the collection and analysis of flight test data — and feeding them back into our models and simulations — is paramount,” he said.