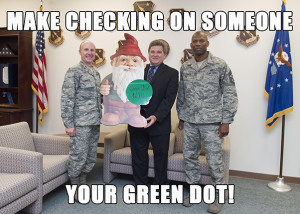 The Air Force Green Dot program and its message of interpersonal violence prevention has been center stage for the past several months at Edwards Air Force Base, Cailf.

Taking action by either directing, delegating or distracting when observing a situation that could escalate to interpersonal violence is a Green Dot.

From Dec. 5-9, The 412th Test Wing wants Team Edwards members to find Gunijoglas (Goonie Jog Las). He is a gnome from another planet that has observed Team Edwards and noticed Green Dot activity. Gunijoglas is curious but shy; he wants to meet people and find out about Green Dot
activities.  Since he’s shy, people have to FIND him and clues to his location are being posted on the Edwards afb Green Dot Facebook page.

Once located he wants people to take a selfie with him and then write a phrase or slogan regarding interpersonal violence prevention and post the resulting meme to the Green Dot Facebook site. Those receiving the most “likes” will result in a first- and second-place winner, who will receive a $75 and $25 AAFES gift card, respectively. The cards are courtesy of the Edwards Enlisted Spouses Club.

A quick example, upon observing someone in a social situation resisting another’s advances, a Green Dot would be taking direct action by simply asking if they are okay or otherwise diffuse the situation. An example of a meme would be “DON’T LOOK THE OTHER WAY, ASK IF THEY ARE OKAY.”

To get started, here’s the first clue: “I have landed in a place where earthlings are seeking knowledge. They appear to be using objects that they hold in their hands as well as using electronic devices to display information.  I also noticed that once they leave this building, they often take the information with them. I hope they bring it back so others may do the same.”