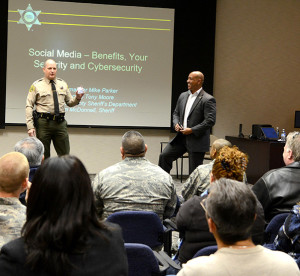 Commander Mike Parker and Detective Tony Moore of the Los Angeles County Sheriff Department joined Team Edwards at the Airman and Family Readiness Center for a morning of discussion and education on cyber security and social media Dec. 1.

The commander and detective briefed nearly 100 people on some of the potential hazards of social media, and ways to keep members and their families safe.

“You, as military and family members, are potential targets for terrorists,” Parker said. He then explained some of the personal information people often put out on social media that can give potential bad actors ways to do harm.

“Has anyone seen the Facebook post asking where you were born?” Parker asked. “It seems like good fun, but it can be combined with other information available on your profile by identity thieves.”

Many people freely share their name, birthday, and plenty of other personal details on social media, according to Parker.

The scheduled one-hour briefing went overtime, since the officers were trying to share two-week’s worth of information in one morning, according to Parker. People were given the chance to take a break and leave the briefing if they chose. Many opted to stay to glean more information.