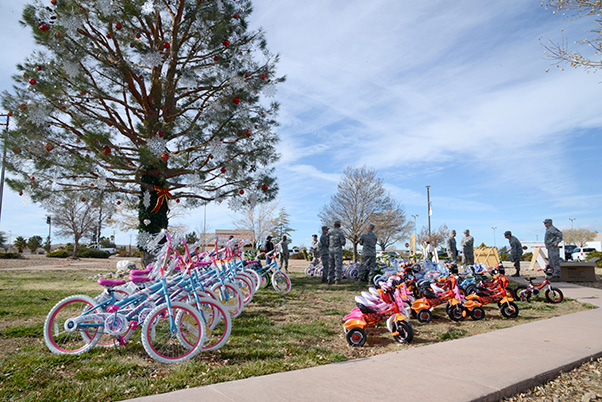 Brand new bicycles arrived at the Edwards Air Force Base, Calif., Exchange parking lot Dec. 13, 2016, to be handed out to dozens of children as an early Christmas gift. Volunteers from Northrop Grumman at U.S. Air Force Plant 42 in Palmdale, Calif., unloaded small, super hero-themed tricycles, boys’ and girls’ bikes and mountain bikes. The Huffy-brand bicycle kits were purchased by Northrop and assembled by employees during their build-a-bike event at their Palmdale facility. The Edwards First Sergeants Council assisted Northrop in their donation by identifying military families that would benefit from some extra assistance during the holiday season. After coordinating with superintendents and direct supervisors, the first sergeants provided a list of ages to Northrop to ensure that children ages four-to-teen received the right-sized bike for the holidays.