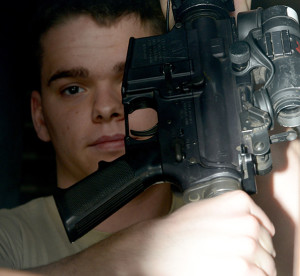 Nearly all military members are required at some point to qualify with firearms. Many opt to own personal firearms also. But members who reside on base and own firearms are subject to certain regulations that do not apply to civilians living off base.

“General (Brig. Gen. Carl) Schaefer (412th Test Wing Commander) is charged with maintaining security on this base,” Campbell said. “In order to do that, one of his policies is to ensure accountability of weapons on the base.”

Campbell said that if police are required to respond to a call at a house on base, it can help them to know what types of weapons, if any, are at the residence.

The registration and transportation requirements for weapons on base follow.

According to the 412th Security Forces Operating Instruction 31-117, all base residents who maintain firearms or unusually dangerous weapons must register them with the 412th Security Forces Squadron by completing an Air Force Form 1314 and DD Form 2760 within five days. A unit commander’s signature is required. The form must also include the member’s address, home phone number and work phone number. Personnel possessing firearms must comply with all federal, state and local laws, ordinances and military regulations on registering, storing, bearing, possessing and using firearms.

Also, if members are storing firearms in base housing, they have to review and sign the Privately Owned Weapons form given to them by Corvias, along with the other documents.

All firearms and unusually dangerous weapons owned by, or in the custody of those who reside in the dormitories or in Desert Villa Temporary Lodging Facilities – while on temporary duty or in the process of a permanent change of station – must be registered and stored at the 412th SFS armory immediately upon arrival to the base. Family housing residents will maintain firearms and unusually dangerous weapons in their homes with their commander’s approval. Housing residents storing reloading components or ammunition in their homes must notify the Edwards fire department at 661-277-3124 or DSN 527-3124.

Ammunition must be stored and locked separately from any weapon.

Transporting privately owned firearms on base is prohibited except to and from authorized storage and shooting areas, namely the Rod and Gun Activity and the 412th SFS Combat Arms Range. When transporting, firearms must be cleared of any ammunition. They must have the safety on and be unconcealed with the breech open. They also must be in the trunk or other secured compartment closest to the rear of the vehicle.
Transporting firearms on bicycles, motorcycles or any other two- or three-wheeled vehicle is prohibited.

The following is a list of unusually dangerous weapons beyond firearms that must be registered on base: swords; knives; daggers with a blade longer than 12 inches (excludes dulled swords used for plaques, shadow boxes or ornamentation, but if the blade is sharpened it must be registered); edged martial arts equipment (such as stars and throwing darts); and archery equipment (including bows, crossbows and arrows).

California Penal Code 16590 lists weapons and potential weapons that are illegal to manufacture, possess and sell. According to the 412th Test Wing Judge Advocates office, all the residential areas on base are proprietary jurisdiction, which means that both California state law and federal law apply. Accordingly, people living on base should comply with both state and federal law – meaning the stricter of the two.