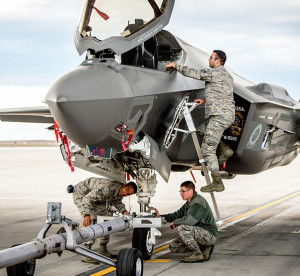 Maintainers from the 31st Test and Evaluation Squadron prepare an F-35A from Edwards Air Force Base during a deployment to Mountain Home Air Force Base, Idaho, in February 2016.

Everything from aircraft in-flight emergencies to personnel suffering sports injuries were examined at the base theater during the 412th Test Wing’s annual Back in the Saddle event Jan. 3, 2016, at Edwards Air Force Base, Calif.

An audience made up mostly of flyers, engineers, maintainers and airfield operations personnel were urged to continue to focus on safety, teamwork and mishap prevention as the wing enters another busy year of flight test operations.

Back in the Saddle combines mishap reviews from fiscal year 2016 with informational briefings for the workforce. Throughout the four-hour morning briefing, personnel had the opportunity to hear about lessons learned in 2016 both at Edwards and throughout the Air Force. The annual briefing is designed to help the base workforce shift their focus back to safely and effectively accomplishing the mission following the holidays.

“Safety is everyone’s program, every single person sitting in this room, from the Airmen to the general, that is the safety program,” said Lt. Col. James Spencer, 412th TW Safety Office chief.

Spencer and Lawrence Kennedy, 412th TW Safety Occupational Safety chief, noted that there were a number of minor mishaps on base, which resulted in damaged property requiring repair or replacement, and injuries that resulted in lost work days. Slips and falls, workers sustaining injuries while working on planes, were examples of work-related mishaps for both Airmen and civilian workers. Sports injuries during physical training or during off-base activities also led to lost work days for Edwards Airmen in 2016.

“Safety really requires courage,” said Spencer who was flying a tanker a few months ago when he received a phone call to return home.

“That doesn’t happen too often. So I got on the radio with the operations desk to find out at least why I had to come home.
They said there was a lost tool and said ‘it might be in your aircraft.’ We came back, taxied and parked, and by the time I got down the ladder, they found the tool. There’s two ways to look at that. It ruined a good, effective sortie, but that wasn’t the thought that crossed my mind. The first thought that crossed my mind was some young Airman realized a mistake was made and fessed up to it knowing the consequences. But, he absolutely did the right thing, having that courage to speak up.”

Other subjects during Back in the Saddle focused on flying safety, airfield driving and test safety procedures and lessons learned.

A common focus for the day was the human element of a mishap. These themes included having good situational awareness, decision making, attention to detail, following technical orders and training.

“The biggest take-away is that our best tools to prevent mishaps are our own personal discipline, our wingman culture, and the courage to speak up,” said Spencer.