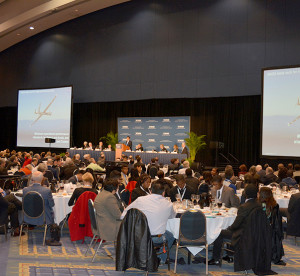 Shin speaks to attendees of the Chairman’s Luncheon for the Transportation Research Board, which represents transportation on land, sea or air.

In the future, aircraft will consume half as much fuel compared to today, generate one-fourth the emissions they do now, fly so quietly that airport neighbors won’t hear annoying noise and fly passengers at supersonic speeds while burning biofuels.

We will see advanced drones, personal air vehicles, and air taxis on demand. All of this and more offers a snapshot of a very possible future that NASA’s aeronautical innovators are making progress toward every day.

This was the picture that Jaiwon Shin, NASA’s associate administrator for aeronautics research, offered Jan. 11 to an audience of more than 700 professionals representing every mode of transportation on land, sea and air.

Shin was the featured speaker at the prestigious Chairman’s Luncheon at the Transportation Research Board (TRB) annual meeting, which was held Jan. 8-12 at the Walter E. Washington Convention Center in the nation’s capital.

TRB is a unit of the National Academies of Sciences, Engineering, and Medicine, which provides independent, objective analysis and advice to the nation, and conducts other activities to solve complex problems and inform public policy decisions.

To that end, Shin briefed the attendees on NASA’s historic contributions to aviation, a research heritage that stretches more than a century and has provided technical advances that today touch every aspect of aviation in the air and on the ground.

Shin discussed both the behind-the-scenes contributions most of the flying public never sees – such as NASA’s work with the Federal Aviation Administration to improve air traffic control efficiency – and visible innovations, such as drag-reducing winglets. 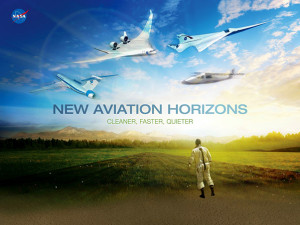 The New Aviation Horizons initiative – a plan to design, build and fly a series of experimental aircraft – was a highlight of Shin’s presentation.

Looking ahead, one of the most exciting things NASA is working on is New Aviation Horizons, a 10-year research initiative that is centered on the introduction of several experimental X-planes. This new initiative will help agency researchers bring 2050 technologies to 2030 aviation.

“NASA’s new X-planes are needed to overcome the physical limits of the current tube and wing aircraft configuration. New aircraft designs will allow us to fully capitalize on the latest research technologies,” Shin said.

Shin also highlighted the dramatic rise in the use of unmanned aerial vehicles.

“I believe we are standing on the verge of a new era in aviation that will cause the merging of the aviation, highway and railway sectors, due primarily to the explosive growth of unmanned aerial systems,” Shin said. “There are literally thousands of applications for these new aircraft and every industry is finding new uses for them every day.”

No matter where all of this research and innovation leads, Shin said the pursuit is critical to ensure the United States retains its global leadership in aeronautics against the increasing number of countries investing in aviation at an increasing pace.