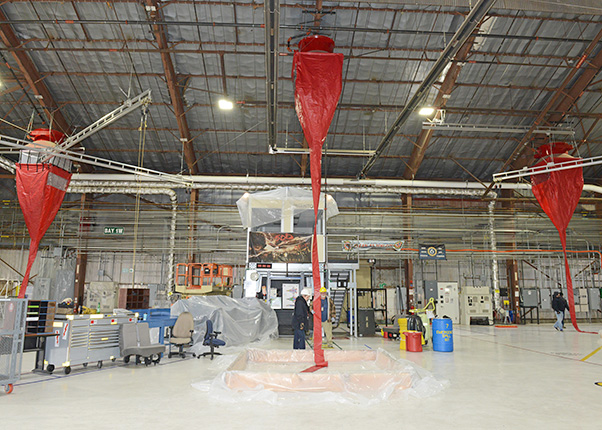 Red plastic funnels were affixed to ten fire suppression foam dispensers in Hangar 1820’s west side to conduct a test of the fire suppression system Jan. 8. Base civil engineers and the Edwards Air Force Base Fire Department used water to test the dispensers, which funneled down to a makeshift containment pool. Using this new funnel test system saved the base $79,750 according to the testers.

Members of the F-35 Integrated Test Force at Edwards Air Force Base, Calif., developed a new funnel system that captures the foam or water deluge during required hangar fire-suppression system tests saving $79,750 and several days of delay, which can be critically important for test programs.

In order to protect workers and multimillion dollar airplanes, such as the F-35 Joint Strike Fighter, tests need to be conducted periodically to ensure hangar fire suppression systems are working properly and can be activated and deactivated.

In the past, planes and equipment needed to be moved out of hangars while remaining equipment was covered in plastic to protect the equipment from either the fire-fighting foam or water that would be dumped into the hangar. After all that, the cleanup effort begins.

“It was estimated that the time required to accomplish the required activities would be four days,” said Steve Bridgers, JT3, Joint Strike Fighter Facilities Engineering. “The original task was to cover all electrical panels, dock boxes and computers. This activity would involve the early shut down of flight testing and removal of all planes from the hangars. Impacts to the flight schedules were impossible to avoid with the fire suppression test.”

Bridgers was one of the JSF Integrated Test Force site support personnel who submitted a proposal that would save “an enormous amount of labor hours.” Their solution was to fabricate a funnel hose assembly to capture the water and funnel it down to the floor to containment pools. Hangar 1820 has multiple fire suppression foam generators that needed a funnel because once the fire suppression system is activated in the eastside or the west side, all foam generators are activated for that hangar. Makeshift containment pools were also needed underneath each funnel to capture the 200-plus gallons of water that would be captured. Water is an acceptable and economic way of testing the foam generators. 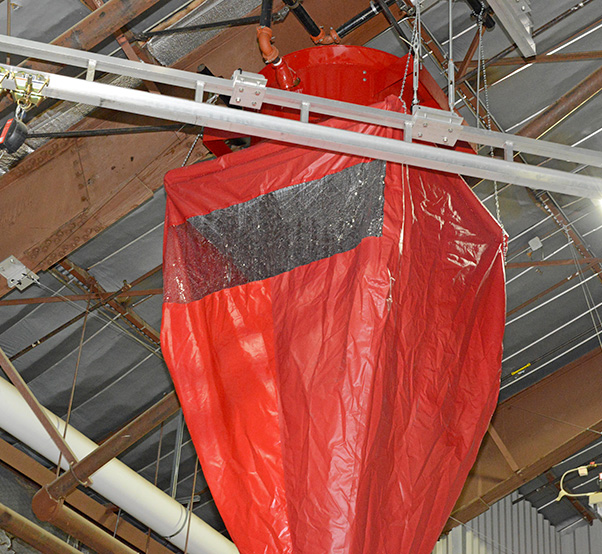 “A prototype funnel was created last year and the fire department tested it (on the flightline) by spraying 150 gallons per minute of water down the funnels at the height of 35 feet, which simulated the height of the hangar. The funnels performed flawlessly and permission was given to purchase 10 funnels and provide them with a window to view the flow of water during the test as desired by the fire department,” said Bridgers.

The Edwards Fire Department then inspected the mounting on the funnels to ensure the windows in the funnels were adequate to see the water flow. After the inspection, the fire department was impressed with the prototype testing and approved the new method for capturing the water, according to Bridgers.

The fire suppression test for Hangar 1820’s east side was on Saturday and the west side on Sunday. What could have taken four days to complete, took about one day’s work. After the fire department gave the go ahead, the fire suppression system was activated sending water down the funnels for about two minutes total. Other than a couple of leaky containment pools that required some mops, the test went as planned and a contractor crew came into extract the water from the ponds with a hose and a tanker truck.

“It was really a complete success,” said Mary Parker, JSF ITF Logistics deputy. “We learned a couple things attaching the funnels during Saturday’s test in Hangar 1820’s eastside, so we were ahead of schedule for the west side’s test on Sunday.”

The tests at Edwards could possibly pave the way as a cost and time-saving procedure for the rest of the Air Force. As with flight test data, Bridgers hopes the official results of this new system will be passed up through Air Force channels so other bases can possibly use it. 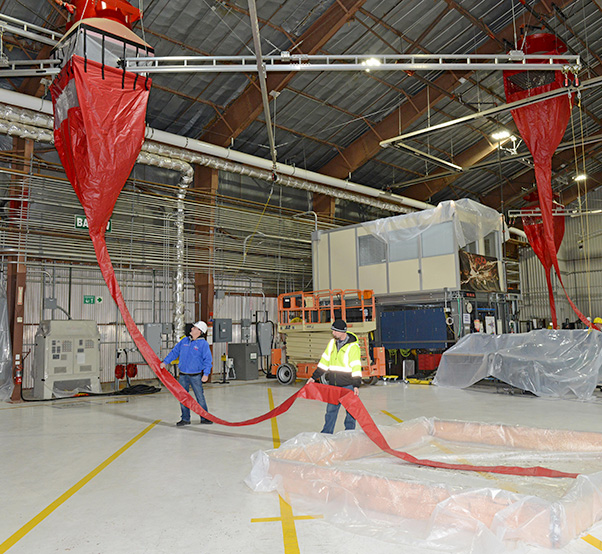 Containment pools (bottom right) were built with wood framing and plastic sheets to aid in water collection during the test. This is a different approach from previous tests where water or fire-fighting foam was released into the hangar after all equipment was manually covered up with plastic.

“The major savings to the F-35 Program was the fact that we were able to conduct the test for the fire suppression system without canceling any flight test sorties,” said Parker. “Plus, the amount of cleanup was reduced to sucking the water from the containment pools, rather than mopping-up an entire hangar – cleanup was accomplished in a little over one hour [versus] multiple hours.”

Bridgers added that the ITF’s JT3 Facilities Team is commended for pulling together to install and remove the funnels; adjust the funnels to accommodate the fall restraint system adjacent to the diffusers; assist with monitoring and adjusting the end of the funnels into the containment pools; and cleaning up the residual water after the contractor had emptied the containment pools.

“This was a Herculean effort by the many agencies that made it a complete success.” 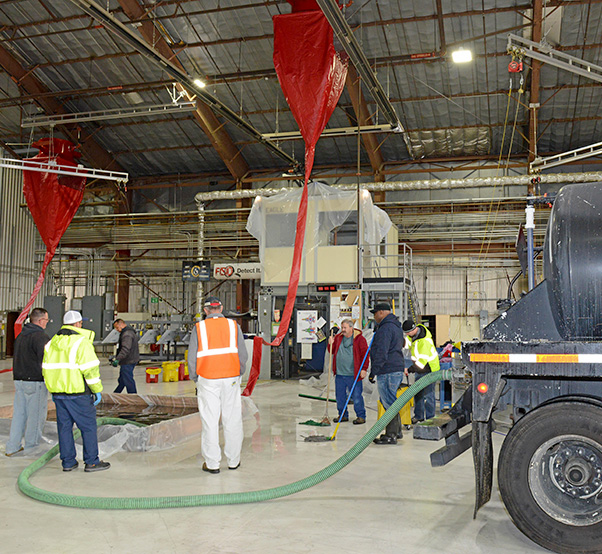 Following the test, the containment pools were drained by contract workers with hoses into a tanker truck. 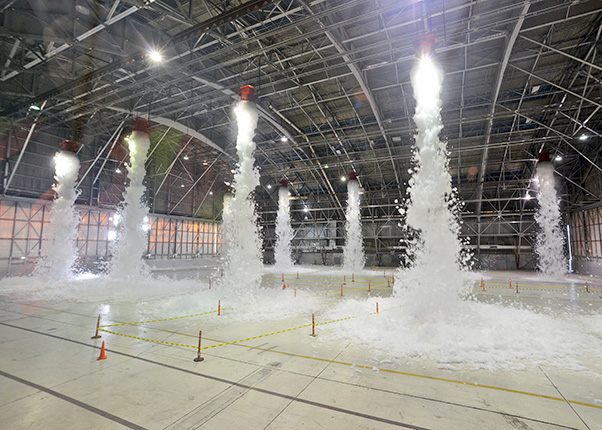 The interior of Hangar 1210 was the site of the base’s most recent emergency scenario exercise that occurred Nov. 26. The hangar, which has 10 large capacity and 2 small capacity foam generators, released approximately 110 gallons of two percent Ansul Jet-Ex foam concentrate that is part of the newly-installed fire suppression system. The foam is detergent-based with additives to keep it stable and keep it from freezing. The purpose of the exercise was so Exercise Evaluation Team members could assess how on-base emergency response personnel gain and maintain control of a site after a fire suppression system discharge incident has occurred. 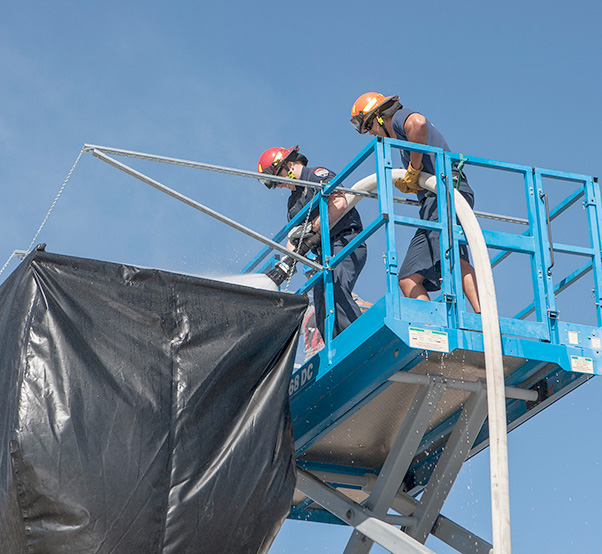 Edwards Air Force Base Fire Department fire fighters spray water down a prototype funnel in May 2016. Officials said the funnel needed a way for them to observe the water flowing inside so plastic windows were installed on the actual test funnels. 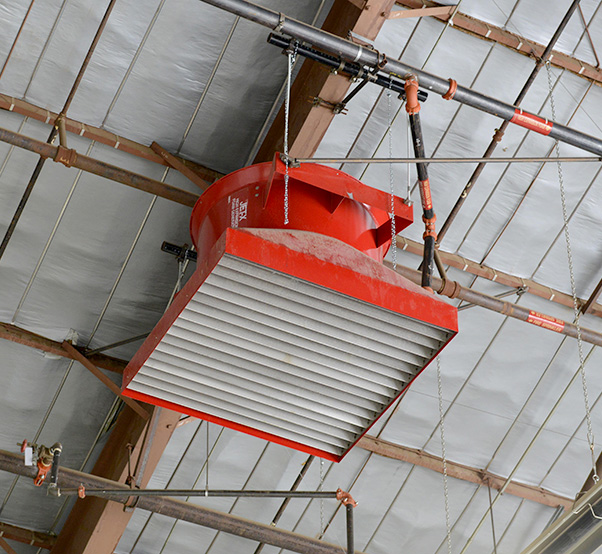