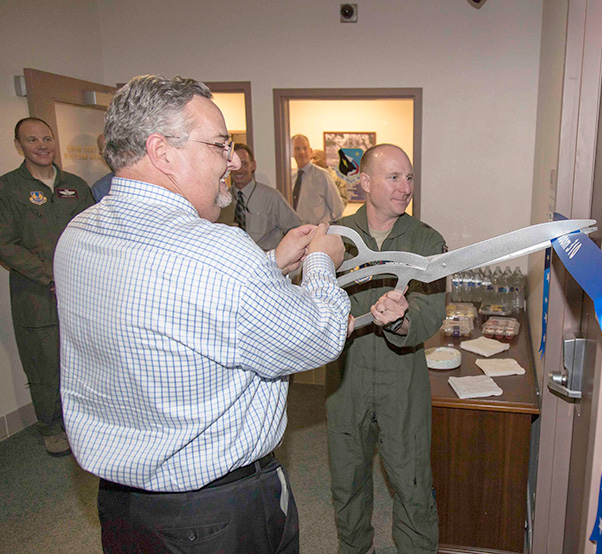 The third floor conference room in the 412th Test Wing headquarters building was reintroduced to Team Edwards with a ribbon-cutting ceremony Jan. 12.

The room, which hasn’t seen any upgrades for about 25 years, got a full cosmetic and technological makeover to bring it more in line with the 21st century.

Richard Backs, a team lead for the XCITE — Experimentation Center for Ideas/Technology Exploration — team, began the presentation by introducing the people and teams involved in the renovation, then turned over emcee duties to Brig. Gen. Carl Schaefer, 412th Test Wing commander.

“We spend a lot of time in this room. When we brief in here, it’s really important — it’s where we brief our distinguished visitors when they come by and visit,” Schaefer said. The conference room is also used for many other working groups throughout the wing. “This is a big deal for us in the test wing,” he said.

Schaefer shared the privilege of cutting the ribbon with Larry Wolford, the XCITE team’s primary lead for the project, and then ushered the guests into the room for an explanation and demonstration of the technology of the room by T.J. Wuth, also from the XCITE team. 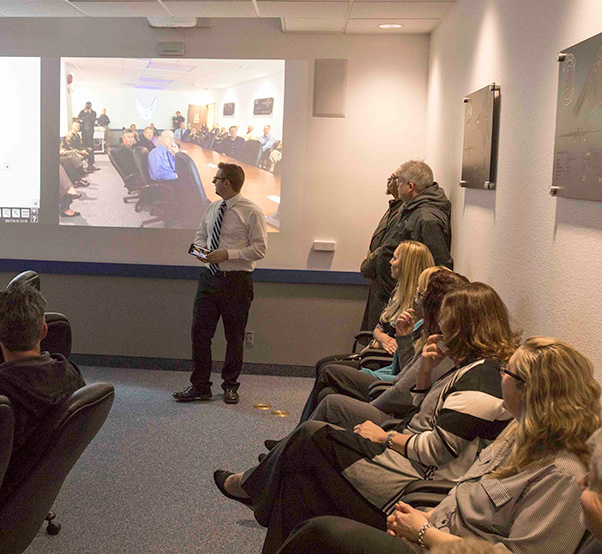 The revamped conference room features a fully interactive display screen covering nearly an entire wall. It features a touch-screen style control, plus a wireless network that allows users to control the display via mobile devices, laptop computers as well as the built-in system. The wall is also coated with dry-erase paint should users feel the need to make marks upon their display.

“Although I don’t know why they would,” said Wuth, as he drew figures on the wall with his finger using the touch-screen function.

The side walls are adorned with laser-etched placards depicting aircraft tested at Edwards and a steel and acrylic Air Force logo, which dominates the back wall and is backlit with LED lighting. The placards, logo and other artwork were all created by Edwards employees in various units.