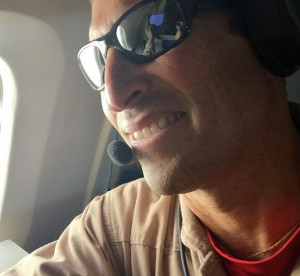 Walter Klein at the navigator’s station inside the DC-8 over Antarctica used a satellite phone to call elementary, middle and high school classrooms back in the United States.

Walter Klein travels all over the world as a navigator for NASA’s DC-8 airborne laboratory.

In 2016 alone, he has navigated the DC-8 on missions as geographically and scientifically diverse as mapping polar ice in Antarctica from 1500 feet altitude, to studying pollution by flying the DC-8 in corkscrew patterns over an Asian mega-city and the California Central Valley.

Klein’s job begins months before a mission happens. He must coordinate with personnel at local air fields where the DC-8 team stages operations. He must also work with air traffic management authorities in the various countries where the aircraft flies. This can be challenging due to language barriers, but with the help of translators he gets the job done.

Klein also works closely with the science teams to carefully plan projected flight paths to meet the mission’s scientific objectives. Many times this results in planning more missions than the team will actually fly, in case of unforeseen circumstances like weather or instrument malfunctions that may cause flight cancellations.

During missions, Klein keeps the aircraft on its projected course and also coordinates with local air traffic management if a change to the flight plan needs to happen.

On top of all of his responsibilities as DC-8 navigator, Klein has a deep commitment to sharing the excitement of NASA Airborne Science Program missions with students, teachers and the public.  On every mission on which he is involved, he always looks for ways to reach out during his personal time- both to the local community wherever the airplane is temporarily based, as well as to students and teachers back home in the United States. 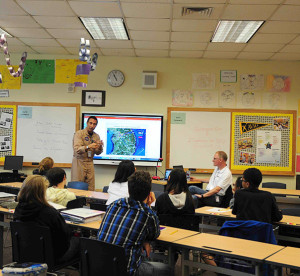 During the Korea US-Air Quality Study (KORUS-AQ), the DC-8 was stationed at Osan Air Base in South Korea. Klein gave numerous presentations to hundreds of students and teachers at Osan Middle and High Schools, sharing with them the reasons why NASA was studying air quality in Korea and the importance of the mission for understanding pollution sources and improving human health.

In addition, Klein also gave tours of the DC-8 airplane and cockpit for many groups of students, inspiring them to work hard in their math and science classes.

During the DC-8’s most recent mission, Operation IceBridge, Klein used a satellite phone to call seven classrooms in five different US states reaching nearly 200 students while flying over Antarctica. Walter also participated in live text-chats with classrooms from the DC-8 using the NASA Mission Tools Suite.

“I can’t even begin to tell you the impact that call had in our class” said 3rd grade teacher Terri Ercole, from Cobbles Elementary School in Penfield, NY when describing the satellite phone call her class received from Walter Klein from Antarctica, “Mr. Klein’s name still comes up in our classroom. He had such a warm and encouraging way with each child. The kids were over the moon excited”

“We were one of the lucky schools that received a phone call from Navigator Walter Klein.” Said 6th grade teacher Laura Menard “Since then, several parents of students in the class contacted me to tell me how excited their child was about the experience. One mom told me last week that her daughter is still talking about it.”

In addition to navigating the NASA DC-8 flying laboratory, Klein’s commitment to education and outreach enables him to navigate and inspire the next generation of scientists, engineers and pilots. 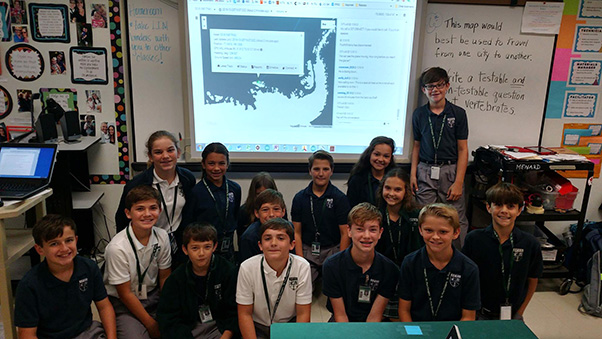 Sixth grade students at St. Pius Elementary school in Lafayette, La., tracked the flight of the DC-8 over Antarctica and received a satellite phone call from Walter Klein from onboard the DC-8 (October 2016).