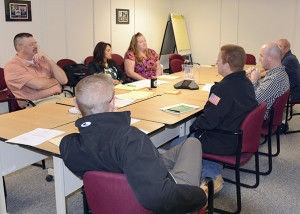 In a low-ceilinged room off a nondescript hallway down a steep flight of stairs beneath an unremarkable building, a group of people meet to brainstorm, exchange ideas and formulate plans to further the goals of their organization.

It sounds like a scene from a movie about evil scientists and world domination, but the goals of this group are far from nefarious. Rather, the people come from units throughout the 412th Test Wing, and their intent is to foster a culture of innovation at Edwards Air Force Base. Calif.

The scene is also somewhat reminiscent of a television reality show where people bring their ideas to the XCITE — Experimentation Center for Ideas/Technology Exploration — team, explaining the goals and benefits, with the hope that the innovation team will see value in the idea and support it with resources.

“The XCITE team is committed to helping personnel bring their innovative ideas to fruition by utilizing 412th Test Wing resources,” said XCITE project manager Stacey Perry. “The most common resources people seek are money, leadership support and advocacy, and connecting with others. Once an idea is received via our SharePoint site, the core team sets up a meeting with the [point of contact] and [subject matter experts]. If the team agrees the idea falls within the innovative criteria and is potentially beneficial to the mission, the POC presents the idea to the XCITE Team in our bi-weekly Thursday meeting. From there, a best path forward is determined, allocating innovation dollars if appropriate.”

During a recent meeting, two new ideas — one involving advanced imagery equipment for range operations, and one to acquire commercially available 3-D virtual reality for electronic warfare applications — were presented. Both were met with enthusiasm and support from the team.

The FAA Traffic Situation Display innovation was one that required minimal investment with a good return. According to the proposal, the innovation would improve situational awareness of aircraft movement and position nationwide, allowing for better coordination of test missions outside the restricted airspace R-2508 complex, which is the Edwards flying area.

There are currently 10 active projects with the innovation team, according to Perry. And those are just the active innovations.

“We have had over 40 ideas submitted,” she said. “[Many] are still being developed – gathering additional information before [they go] to the XCITE brief, while others were connected with the correct SME or team.”

The innovation process starts with submission of an idea to the team’s SharePoint site, which is reviewed daily by members of the core team. Team members will meet with the submitter, locate a subject matter expert to discuss the idea, then if it meets criteria, the submitter will be asked to present at the Thursday ‘Shark Tank’ meeting.

The desire is to get projects pushed through in days or weeks, a fairly short timeline, Rubino said.
“We want to cut through the bureaucracy we’re so used to,” he said.

According to the team, all suggestions are looked at, and the possibility of failure is not necessarily a disqualifier.

“Failures are viewed as learning opportunities that contribute to future success,” Perry said.

In the “Innovation Master Plan,” Brig. Gen. Carl Schaefer, 412th Test Wing commander, wrote, “Innovation is the key. We must harness current and future technology to speed capabilities to the field. It is essential to identify technological and process innovations to enable the future of developmental test and our installation support.”