Branch fourth-graders received a lesson in emergency preparedness with encouragement to take what they learned back to their families.

The Pillowcase Project is sponsored by The Walt Disney Company, which allows Red Cross volunteers to visit third-fifth-graders around the region bringing them information and preparedness tools.

The students each received a preparedness toolkit, which includes a “My Preparedness Workbook” and a personalized pillowcase to build their personal emergency supplies kit. The children are able to put items in the pillow case they may need during an emergency as well as draw pictures of items and people on the outside. They also received a pledge certificate and an Air Force “Be Ready Kids!” activity book from Edwards AFB Emergency Management.

“The biggest thing is that we want these children to take what they learned about preparing for emergencies back to their families,” said Russell Warner, 812th CES, Emergency Management specialist. “You’re never too young to be prepared. We hope learning about emergency preparedness at a young age keeps children calm during an emergency.”

The one-hour sessions with the Red Cross volunteers and students were interactive, with the visitors calling upon the students to talk about what they know about emergencies and what they learned during the class.

“We’ve been trying to get the Red Cross Pillowcase representatives out here for the past two years and we finally got to schedule them to come out and talk to the fourth-graders. They will also to come visit the third and fifth graders by the end of the school year.”

According to the Red Cross, more than 515,000 students have been taught preparedness skills through the Pillowcase Project. 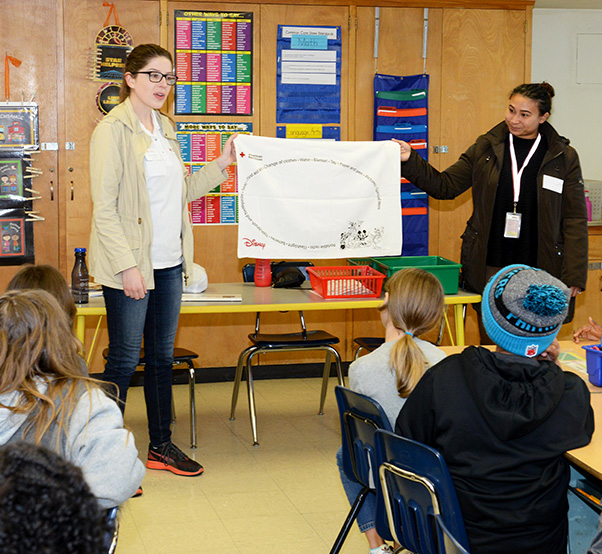 American Red Cross volunteers Haley Seibel (left) and Tamara Alcantara talk to fourth-graders at Irving L. Branch Elementary Jan. 19, 2017, about the Red Cross’ Pillowcase Project. Subjects touched on by the volunteers included managing stress during an emergency; what to do in case of a fire or earthquake; and what items the children should pack during an emergency in their pillowcase.

Back to school for Team Edwards! Put safety first