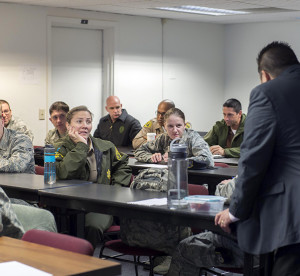 The classes were taught by Department of Homeland Security trainers and focused on non-invasive behavior detection techniques based on scientifically-validated behaviors to identify individuals who potentially pose a threat.

“The training is hand-crafted by Transportation Security Administration and DHS to incorporate specific tactics in order to detect any suspicious or potential terroristic acts on a one-on-one basis, or upon a group confrontation with the public,” said Tech Sgt. Keith Daniels, 412th SFS Training Section. “The 412th SFS commander advised us of this training and the 412th SFS Training Section tracked it down and scheduled it.”

In addition to 412th SFS defenders, the training was attended by Airmen from the 99th Security Forces Squadron from Nellis Air Force Base, Nev.; and representatives from California Highway Patrol, Los Angeles County Sheriff’s Department and officers from Fort Irwin, Calif.

“One of the crucial parts of our job is reading people so it’s good to have some certified instructors come out and go over some techniques and skills,” said Staff Sgt. Brandon Anderson, 412th SFS.

According to the TSA, the agency deploys more than 3,000 full-time behavior detection officers in the aviation and surface transportation sectors. The BDA program identifies potentially high risk individuals exhibiting behavior indicative of excessive fear or stress and re-routes them for additional screening by looking for a combination of individual indicators that warrant a follow-up.

“This training is new to security forces and, as far as we know, the 412th SFS ground-floored the BDA training for the Air Force. We have a standing relationship with our local law enforcement agencies and we collaborate on training opportunities frequently,” Daniels said.

Edwards defenders say their squadron tries to do as much training as possible both on base and with local law enforcement agencies.

“Any more tools that we get that we can put into our tool box is always beneficial,” said Master Sgt. Cameron Freeman, 412th SFS Training Section superintendent.