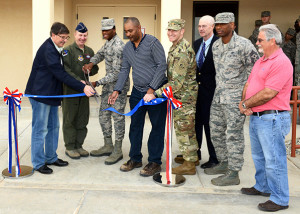 A ribbon cutting was held Feb. 8, 2017, to signify the completion of Dormitory 2424 after extensive renovations and upgrades.

The official ribbon cutting of the newly renovated Dormitory 2424 took place Feb. 8, 2017, at Edwards Air Force Base, Calif., to signify the completion of its major renovation.

The dorm features updated amenities constructed in an apartment-style configuration that includes 61 bedrooms arranged into 20 suites.

Judkins credits the dormitory management staff, first sergeants and command chief for developing the plan to allow the smooth transition of residents to the building while working to bring unit integrity to the entire dormitory campus.

The entrance to each suite is through a combined living area that includes a kitchenette, which opens into individual bedrooms surrounding a small hall. Vinyl plank flooring runs through the common areas, while the bedrooms are carpeted.

The living area in each suite is furnished with a sofa, table and television stand with connections for a television and the internet. The kitchenettes include Corian counters with a breakfast bar, cooktop, over-the-range microwave/convection oven, refrigerator, dishwasher and sink with a garbage disposal.

Conveniently located in each suite is a stacked commercial-style washer and dryer set. Airmen can now do laundry in their own suite and not carry laundry baskets to and from central laundry rooms.

“The main desirability of the new dormitory will be the private bathrooms; each Airman will have a private bathroom connected to their bedroom. It’s like a multi-bedroom apartment that you would find on any college campus or downtown complex,” said Jeff Lensch, 412th Civil Engineering Group housing specialist. “The bathrooms are nicely appointed with a combination tub and shower, ceramic floor and wall tiles, a Corian vanity and mirrored medicine cabinet.”

Other amenities include having control of the temperature settings in the bedrooms with individual heating/cooling fan coil units. There is natural and overhead lighting in each suite with blackout shades and blinds on all windows so residents can adjust natural light to their preference. The rooms come complete with solid wood furnishings, an adjustable captain’s bed, nightstand, dressers, a desk and chair.

For convenience and personal preference, there are television/communication outlets on two walls in each bedroom. 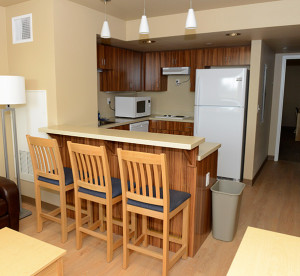 The kitchenette and common area of a three-bedroom suite in Dorm 2424. Air Force dormitory adequacy standards changed in 1996 to allow a room for every Airman with two Airmen sharing a bath and a kitchenette. In 2003, the current Dorms-4-Airmen standard was established to allow each resident a private room and bath in a suite setting.

A central foyer welcomes Airmen to the shared common areas in the building and includes an area for vending machines and personal mailboxes. For socializing, the first floor has a common kitchen plus a lounge with sofas, flat screen television and a ping-pong table. Large lockers are provided on the second floor for Airmen’s personal storage. The building is finished off with xeriscaping, including drought-tolerant plants, hardscape and exterior security lighting.

Dormitory 2424 was built in 1958 and was last renovated in the mid-90s. The facility originally had interior hallways and later was reconfigured with balcony entrances. The exterior entrances allowed two rooms to be connected by a shared bath. Air Force dormitory standards changed in 2003 establishing a new Dorms-4-Airmen model, which allowed for three or four Airmen to share a suite with each having a private room and attached bath with a common living/kitchen and laundry area.

The project was contracted through the Army Corps of Engineers, who in concert with the 412th CEG, had oversite and maintained quality control.  Au Authum Ki was the prime contractor in the renovation project for Dorm 2424 in a design, build contract valued at $8.5 million.  Construction began July 2015 and was completed on Jan. 17. In addition to the reconfiguration of the building, other major upgrades include bringing the fire suppression/alarm systems and the seismic structure up to current codes. Additionally, a mass notification system was installed in the building.

Joseph Hunt, 412th CEG, project engineer, stated, “This facility meets Air Force and Edwards AFB goals to provide safe and efficient living, durable facilities with low maintenance features and low lifecycle costs. Dorm 2424 will bring many years of enjoyment to Airmen stationed at Edwards AFB. Airmen are excited to be able to reside in a modern, apartment-like atmosphere and especially appreciate having their own bathrooms.”

Kevin Jones, 412th CEG, Unaccompanied Housing Manager, said, “Our next goal is to petition the Air Force to allow us to keep and renovate Bldg. 2425, the last older dorm on the campus.  It has been identified for demolition in the distant future; however, with the projected number of junior enlisted to be assigned to Edwards AFB, we expect a need for the additional space to house them.”