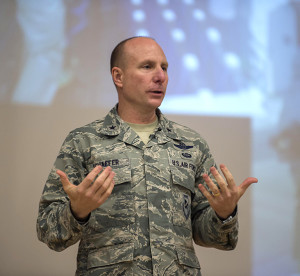 Brig. Gen. Carl Schaefer, 412th Test Wing commander, addresses the audience during his commander’s call Feb. 1, 2017, in the base theater.

EDWARDS AIR FORCE BASE, Calif. — Brig. Gen. Carl Schaefer, commander of the 412th Test Wing at Edwards Air Force Base, Calif., updated Team Edwards on test programs, highlighted recent accomplishments and thanked everyone on base for their hard work and dedication in accomplishing the mission at two commander’s calls held Feb. 1 in the base theater.

Edwards continues to be a busy workforce with testing being done to enhance almost every airframe in the Air Force inventory, including all three service variants of the F-35 Joint Strike Fighter. Among some of the test programs the general highlighted were the F-16 Automatic Air Collision and Avoidance System; preparations for F-35 Initial Operational and Evaluation Testing; continued testing with the new KC-46 Pegasus aerial refueling tanker; and continual upgrades to the bomber force. The 412th Maintenance Group continues to maintain 75 aircraft with 15 different airframes.

Schaefer also applauded the work of the 412th Electronic Warfare Group who have been instrumental in recent B-2 and B-52 electronic warfare testing and also the work in supporting the development of a flight simulator for the F-35 JSF Program. The group has also done testing with the KC-46, which will replace the Air Force’s 60-year-old fleet of KC-135 Stratotankers.

Schaefer lauded the work of the base support workforce including the 412th Civil Engineering Group that oversaw the moving of the F-22 Raptor Integrated Test Force to a new compound on the flightline to make space for future programs coming to Edwards.

Other accomplishments noted were the expansion of pharmacy hours and the recognition of having one of the Air Force’s 12 Outstanding Airmen of Year at the 412th Medical Group. The 412th Mission Support Group graduated 27 new members of the Blue Eagles Honor Guard, who provide services throughout Southern California. The group also implemented a credit card service at the dining facility and expanded the Airman Leadership Class to include more students, including civilians, which is first for Air Force Materiel Command. 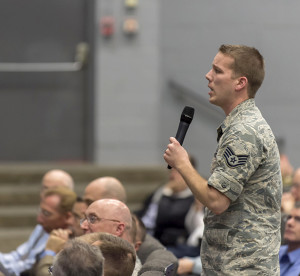 A Team Edwards staff sergeant asks Brig. Gen. Carl Schaefer, 412th Test Wing commander, a question during a commander’s call Feb. 1, 2017, in the base theater. The session ended with a question and answer period from the audience.

Schaefer concluded the commander’s calls with information he took away from a recent conference of wing commanders presided over by Gen. David Goldfein, Air Force chief of staff. Schaefer spoke on both Air Force and 412th TW strategic goals and the Air Force’s desire to revitalize the squadron, which “is the focus of our Air Force.”

“It’s how we develop people. It’s how we build our skills. It’s where we take care of families, and we need to make sure they’re resourced correctly. That is the foundational organization for our Air Force,” Schaefer said.