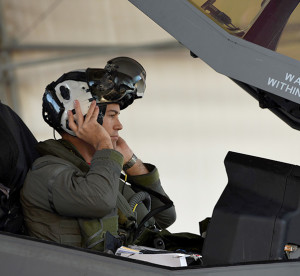 Navy Lt. Cmdr. Charles Escher, Strike Fighter Squadron (VFA-101) operations officer, dawns his helmet prior to flying an Air Force F-35A Dec. 6, 2016, at Eglin Air Force Base, Fla. For only the second time at Eglin, a Naval Aviator has been selected to dual qualify in the U.S. Navy’s F-35C and the Air Force’s F-35A. Escher plans to use what he learns from his experience with the 33rd FW to help the F-35 enterprise grow.

As he stands at the step desk, you wouldn’t miss the subtle differences in his uniform. His brown leather boots seem foreign next to the sage green ones accompanying him.

As is custom in the 58th Fighter Squadron, pilots roar “RAGE!” throughout the building. However, today this pilot is given a more fitting send off. He begins to turn the corner as a smirk creeps across his face. He nods with approval and marches out of the building as “Danger Zone” blares in the background.

Rather than taking his familiar path to the stenciled grim reaper wielding his sickle; today he will beat his chest and fly with the Mighty Gorillas.

For only the second time at Eglin Air Force Base, Fla., a Naval aviator has been selected to dual qualify in the U.S. Navy’s F-35C and the Air Force’s F-35A.

Lt. Cmdr. Charles Escher, VFA-101 operations officer, experienced the F-35A for the first time during his initial flight on Dec. 1, followed by a check ride the next week with Col. Lance Pilch, 33rd FW commander.

“(This is) hopefully the start of a program where we have pilots crossing over to help each other by teaching and learning tactics and determining things we can improve, thereby making the squadrons operate more smoothly together,” Escher said.

Escher knew from a young age that he wanted to fly for the Navy but he hadn’t fully made up his mind until his first day at the Naval Academy.

He recalled standing and taking his oath of office. As they finished two F-14 Tomcats flew overhead.

“Very loud and very fast,” he said, a smile widening across his face. “That was when I knew I needed to fly.” 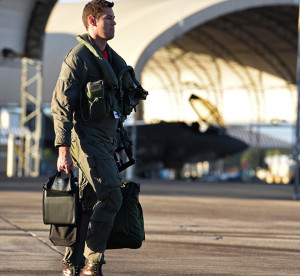 Escher was selected to fly the Air Force’s variant because of his knowledge and experience across a wide variety of aircraft.

After starting his career as an F-18 Super Hornet pilot, Escher went to Empire Test Pilots’ School in England where he would fly more than 25 different aircraft alongside British Royal Air Force and other international pilots.

“The knowledge and experience you gain from flying that many different aircraft, and aircraft that are outside of your comfort zone, whether that’s helicopters or heavies, aerobatic aircraft or fighters from different countries, it makes it a smoother transition,” Escher said.

The F-35A and F-35C were intentionally designed to be very similar aircraft. While flying systems are virtually the same, Escher noted differences in the way the jets fly because of its physical characteristics. The largest task to overcome however wasn’t the aircraft, but the difference between branches.

“The way the Air Force does some things and the terminology are different than in the Navy,” he said. “There are quite a few differences that are eye opening and it makes you want to bridge those gaps.”

Those gaps, in part, are why the 33rd FW and VFA-101 have taken this opportunity to share knowledge. As other services gain ground on announcing F-35 Initial operations Capability as the Air Force did earlier this year, the three branches will work more hand-in-hand with one another. 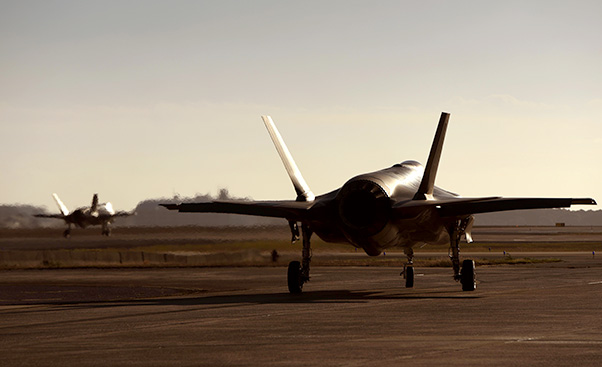 Escher says he can already see the benefits of the relationship and looks forward to experiencing enhancing/continuing the flow of information to promote growth across the fleet.

“With the Navy, Marine and Air Force aircraft, we’re each flying our own mission in our own separate entities, but we can definitely share lessons learned on tactics,” Escher said. “When we put together a large strike package we will already know what the capabilities and limitations are based on our own experience.”

The Naval pilot plans to use what he learns from his experience with the 33rd FW to help the F-35 enterprise grow. He looks to join a group of test pilots at Edwards AFB, California, where he will have the opportunity to be the Navy’s voice for the aircraft weapons and vehicle system development.

Beyond that, he is glad he has the greatest job in the Navy and the Air Force as an F-35 pilot.

“I’m happy to be able to fly both variants. It’s a super big treat.”