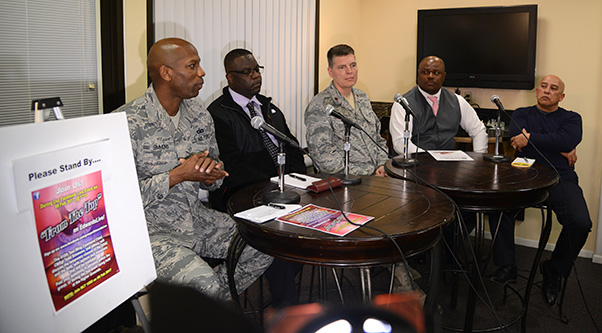 Chief Master Sergeant Todd Simmons (left), 412th Test Wing command chief, uses social media to be sure his voice is heard far and wide Feb. 8 during a Facebook Live broadcast titled “From the Top” from the Higher Grounds internet café in the dormitory complex. Edwards top enlisted leader was joined by a panel of experts — Damion Hart, 412th Force Support Squadron food service officer; Chaplain (Maj.) John Von Almen, 412th Test Wing; Quintin Pollard, personal finance manager with the 412th FSS; and Robin Nobriga, chief of quality assurance with the 412th Comptroller Squadron – share their knowledge with Edwards Airmen to help mitigate the effects of the closure of Edwards’ Dining Facility. The facility is scheduled to close for approximately three months for renovation. According to the chief, there will be more Facebook Live events in the future, as this is a very effective and far-reaching way to communicate. Edwards is one of the few Air Force bases to use Facebook Live as part of its communication strategy. This was the first time Edwards has used Facebook Live as a town hall style format.