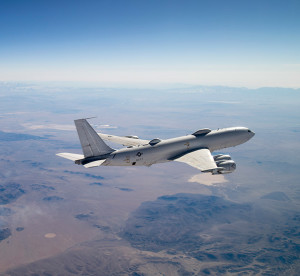 The E-6B Mercury is a communications relay and strategic airborne command post aircraft. It provides survivable, reliable and endurable airborne command and control, and can communicate between the National Command Authority and U.S. strategic and non-strategic forces. The Navy has two squadrons, the “Ironmen” of VQ-3 and the “Shadows” of VQ-4, which deploy more than 20 aircrews from Tinker AFB to meet these requirements, according to the Navy.

“They chose Edwards because of predicted clear weather during the test campaign. Unfortunately, it rained just about every day the first week they were here.”

According to the Navy, the E-6B was conceived as a replacement for the Air Force’s Airborne Command Post due to the age of the EC-135 fleet. The E-6B is a modified E-6A with added battle staff positions and other specialized equipment. The E-6B is a dual-mission aircraft capable of fulfilling either the E-6A’s mission of linking the NCA with naval ballistic missile forces, or the airborne strategic command post mission, and is equipped with an airborne launch control system.
The ALCS is capable of launching U.S. land-based intercontinental ballistic missiles.

The first E-6B aircraft was accepted by the Navy in December 1997 and the E-6B assumed its operational missions in October 1998. The E-6 fleet was completely modified to the E-6B configuration in 2003.